There’s nothing in this world like having a child. I am so blessed God has given Lisa and I not just one child, but one boy and one girl. That right there is what we like to call the American dream. Just as many mothers wish for a daughter to take trips to the mall and salons with, most every guy out there wants a boy that he can take hunting and fishing. We always joke around how Emma Jo is so attached to me and Wyatt is so attached to Lisa. That one day I’m going to ask who wants to go fishing and Emma Jo’s eyes are going to light up just as Wyatt says, “Um, Mommy and I were gonna go shopping…” There would be the awkward pause by me with a disgusted look on Emma Jo’s face.

Lisa and I are big believers in the whole teach them young principle. Wyatt may not be old enough to walk around in the woods or creeks with me quite yet, but Emma Jo is. So while Emma Jo still loves to do outdoors things with me, I’ll get her out there as much as possible. I’ve had plenty of opportunities to take her fishing. I’ve written about a few experiences already, but they all involved water. But this fall would mark the beginning of a new tradition. This year, she would tag along with me in the woods. First thing she needed was some good hunting clothes. I went into the store with zero emotion. Just a task to get some stuff that’ll keep her warm on a September morning and that’s it. When I saw all the choices, well, let’ just say I spent enough to make my jaw drop at the checkout.

Of course she had to put everything on as soon as I walked in the door with it. 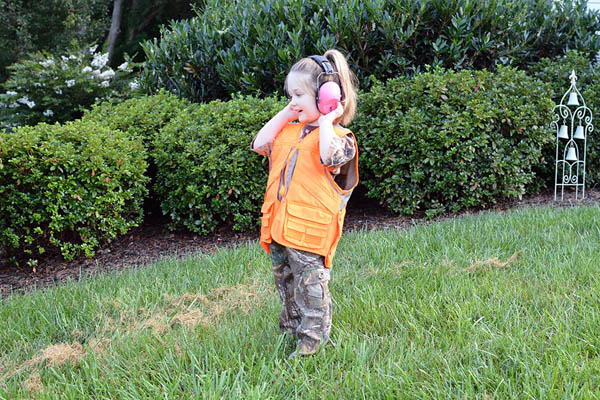 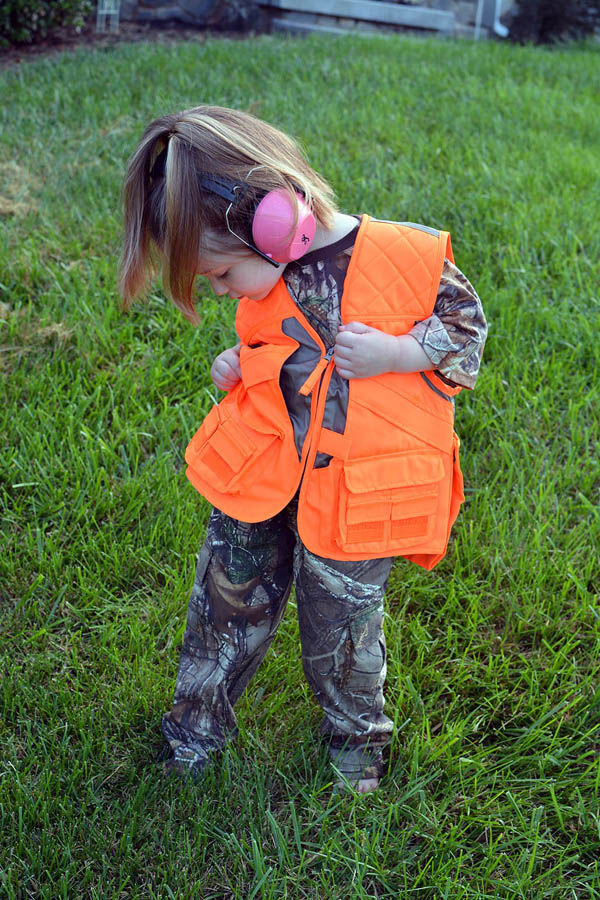 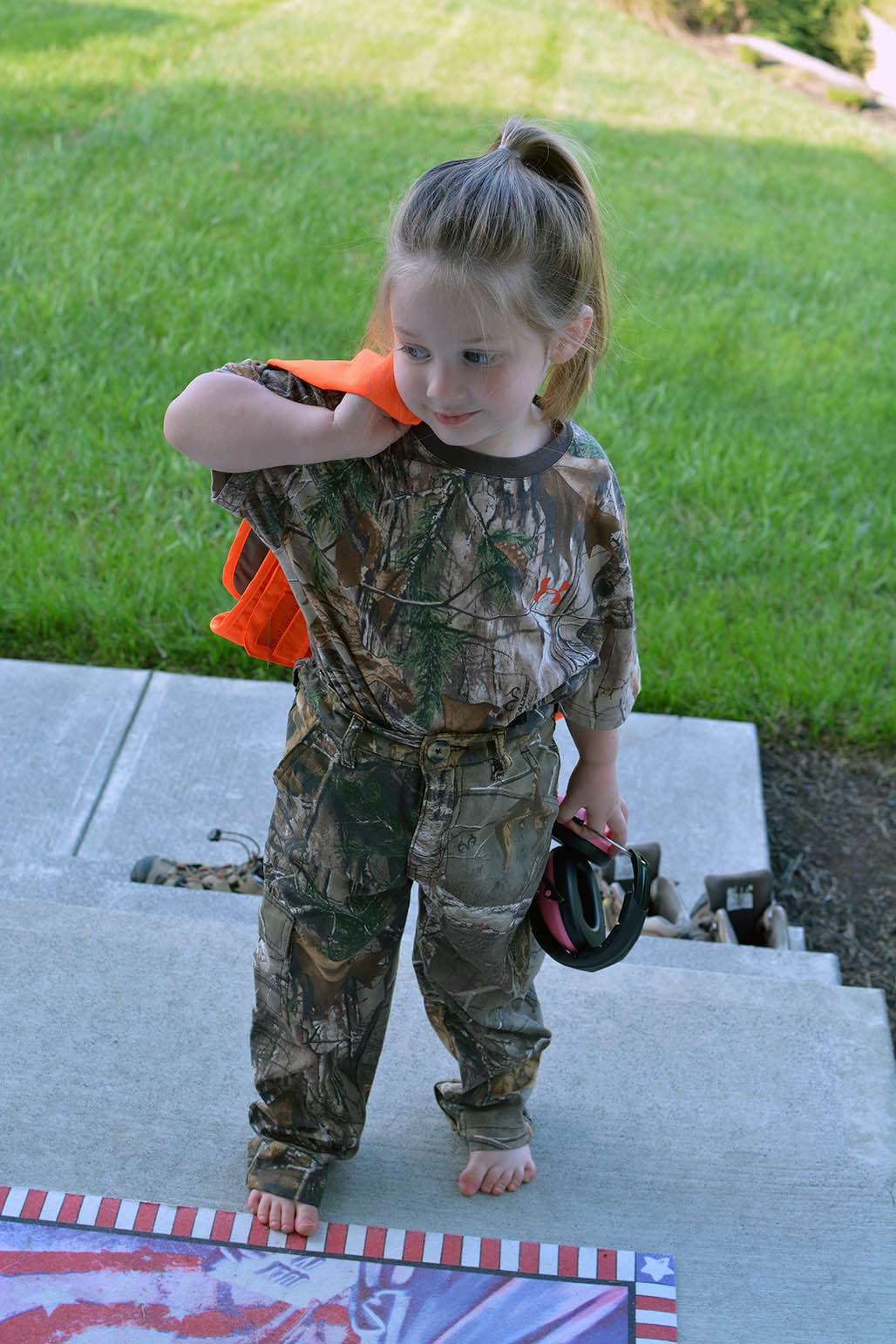 And these were her pajamas for the rest of the week… 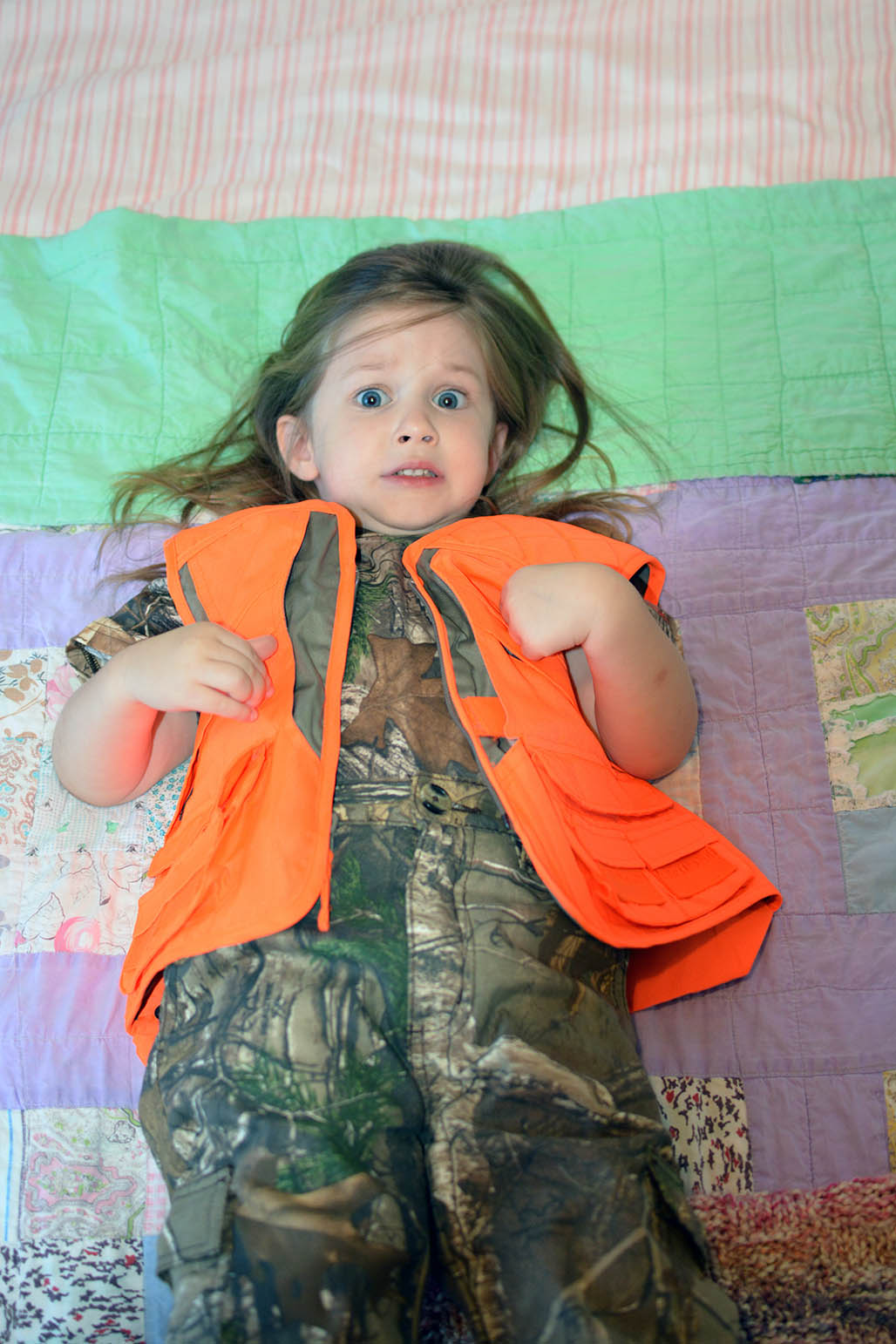 Now that the clothes were checked off the list, she needed a weapon. She’s still not at the age where she needs to even touch one of my weapons. So I felt the need to get her her own. 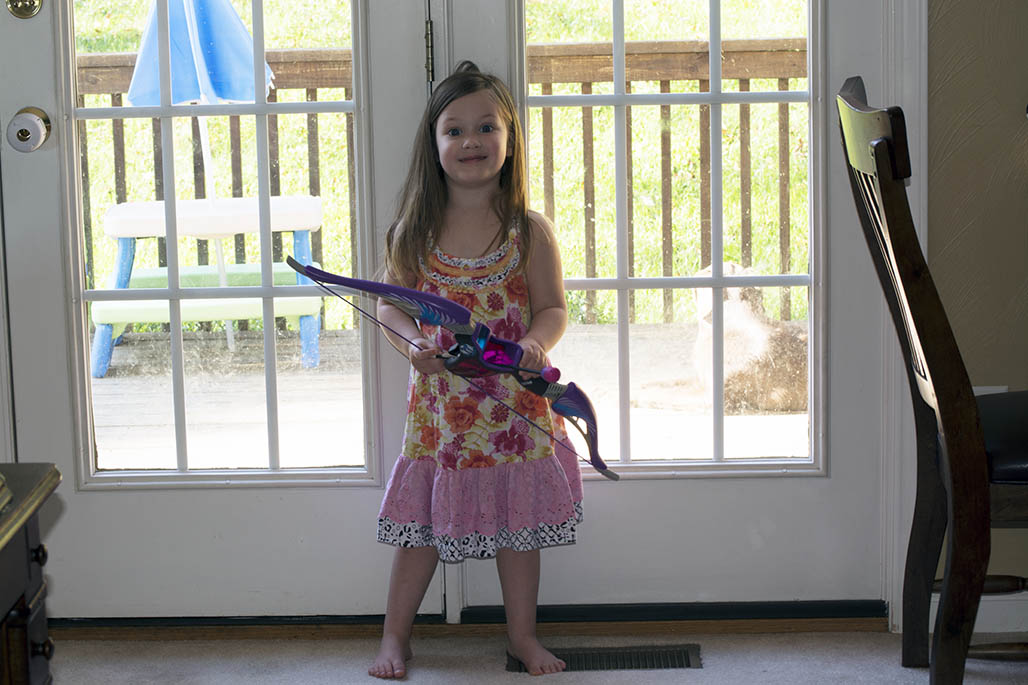 Now those of you who have younger kids probably know of a movie called Brave. Well, Emma Jo is quite fond of Merida. So when I called her Merida, she engaged the permagrin. We practiced and practiced, and started the long process of instilling weapons safety and muzzle awareness. Before this point, she had pretending with sticks or anything that was in the shape of an arrow. She’d hold one like the bow and would line the other up then throw it like a dart. Needless to say, it took a little while to teach her the concept of pulling back and letting go with the bow. But she caught on and she got good. Very good. 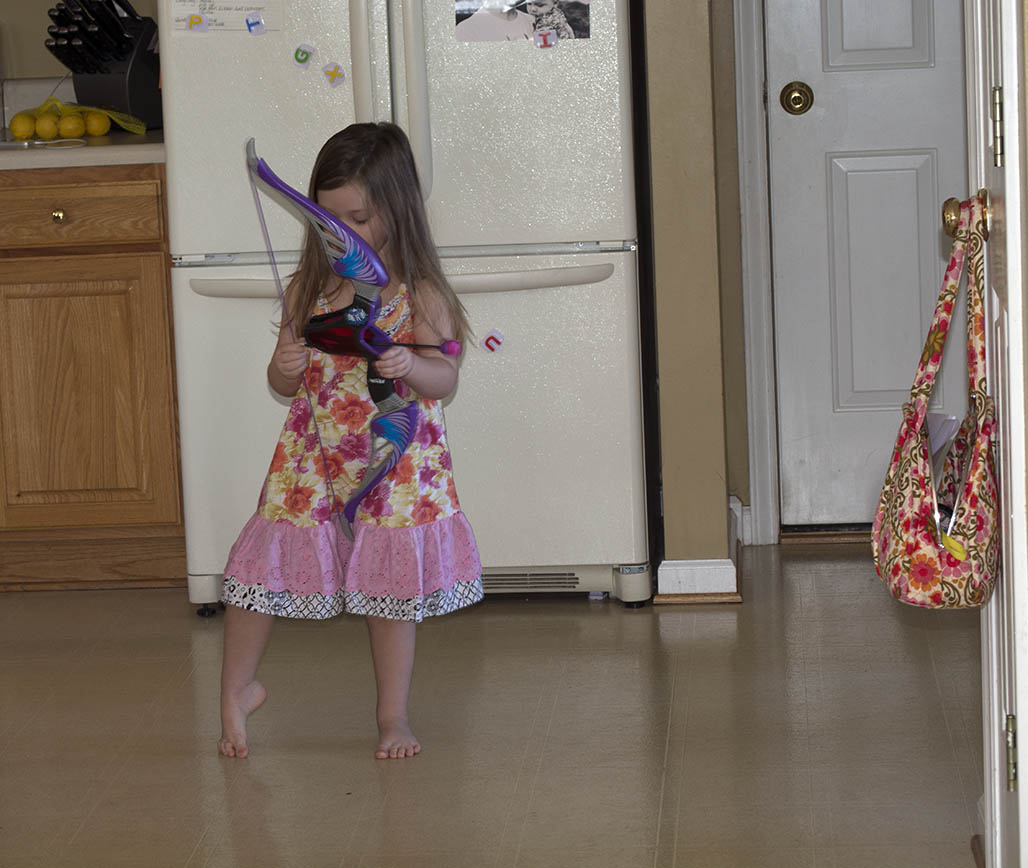 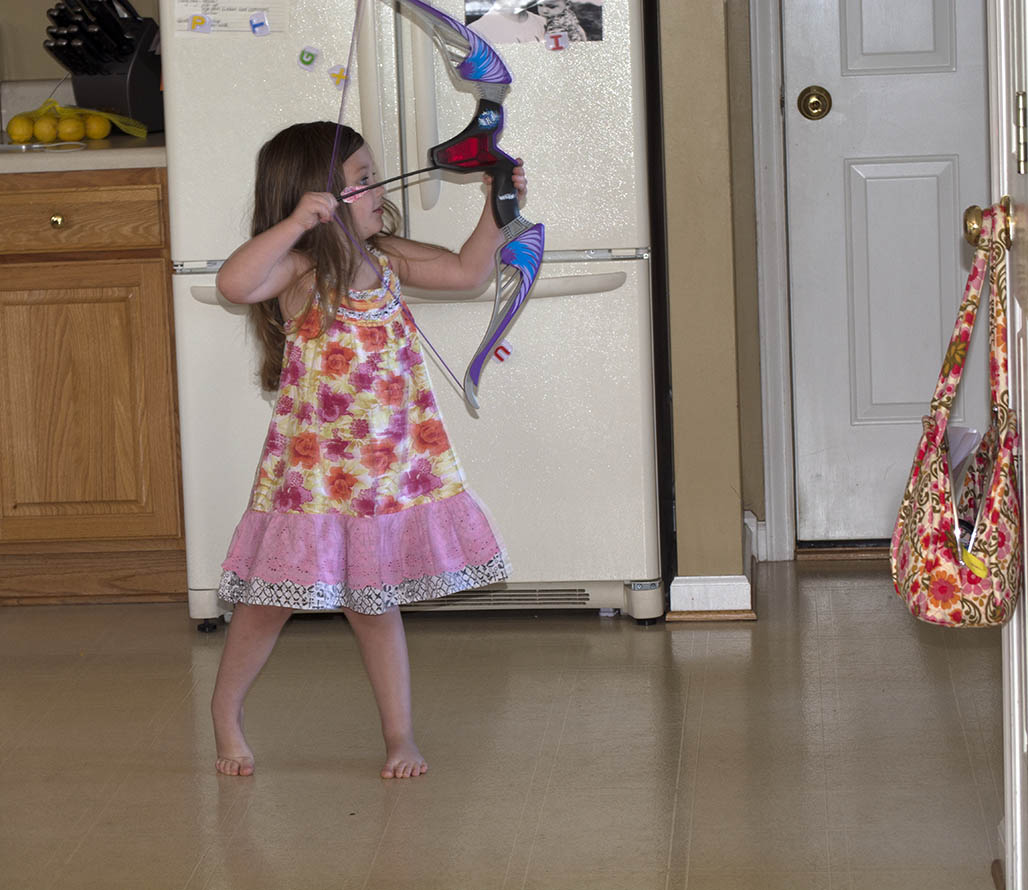 Some of my fondest memories when I was around her age were the times I was the tag along with my grandfather, Daddy Doe. So I was so excited to have my father there to take the place of his father. Of course Lisa had to get some snapshots before we left. 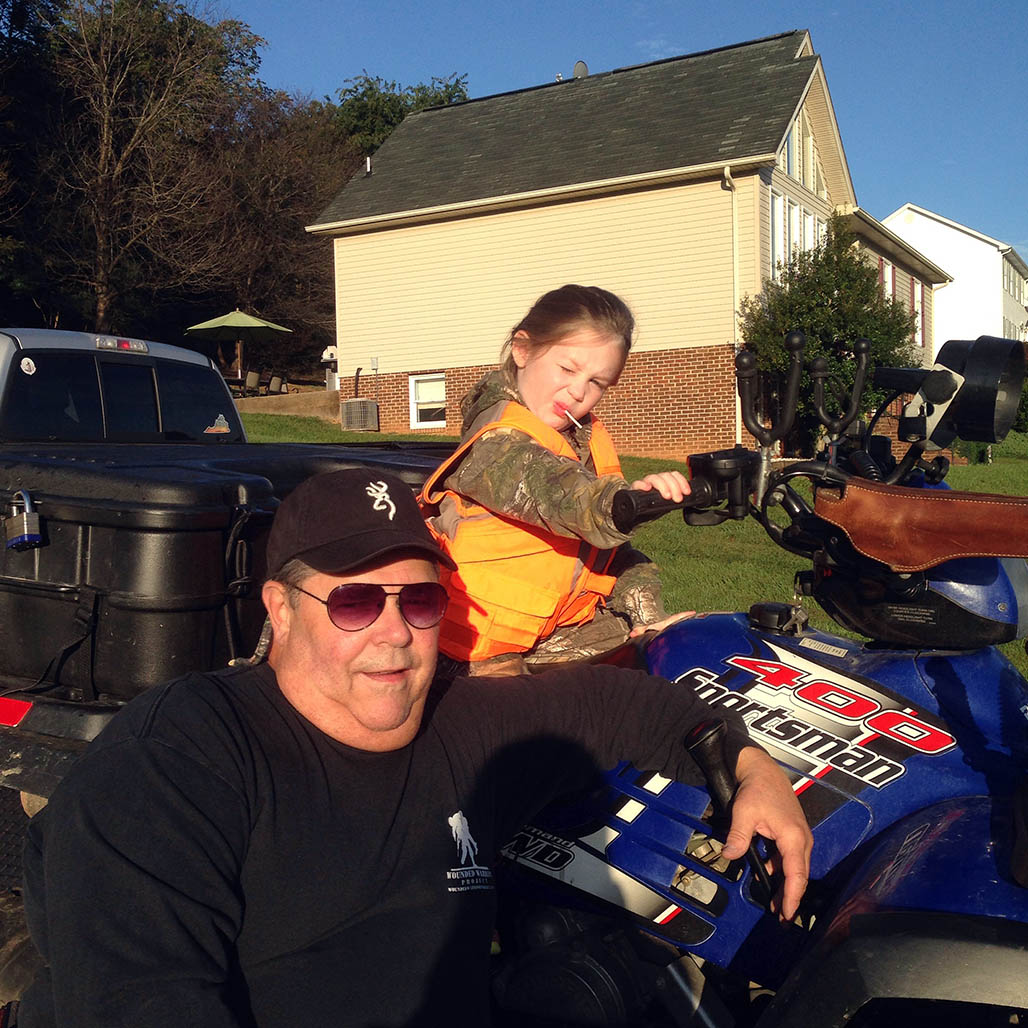 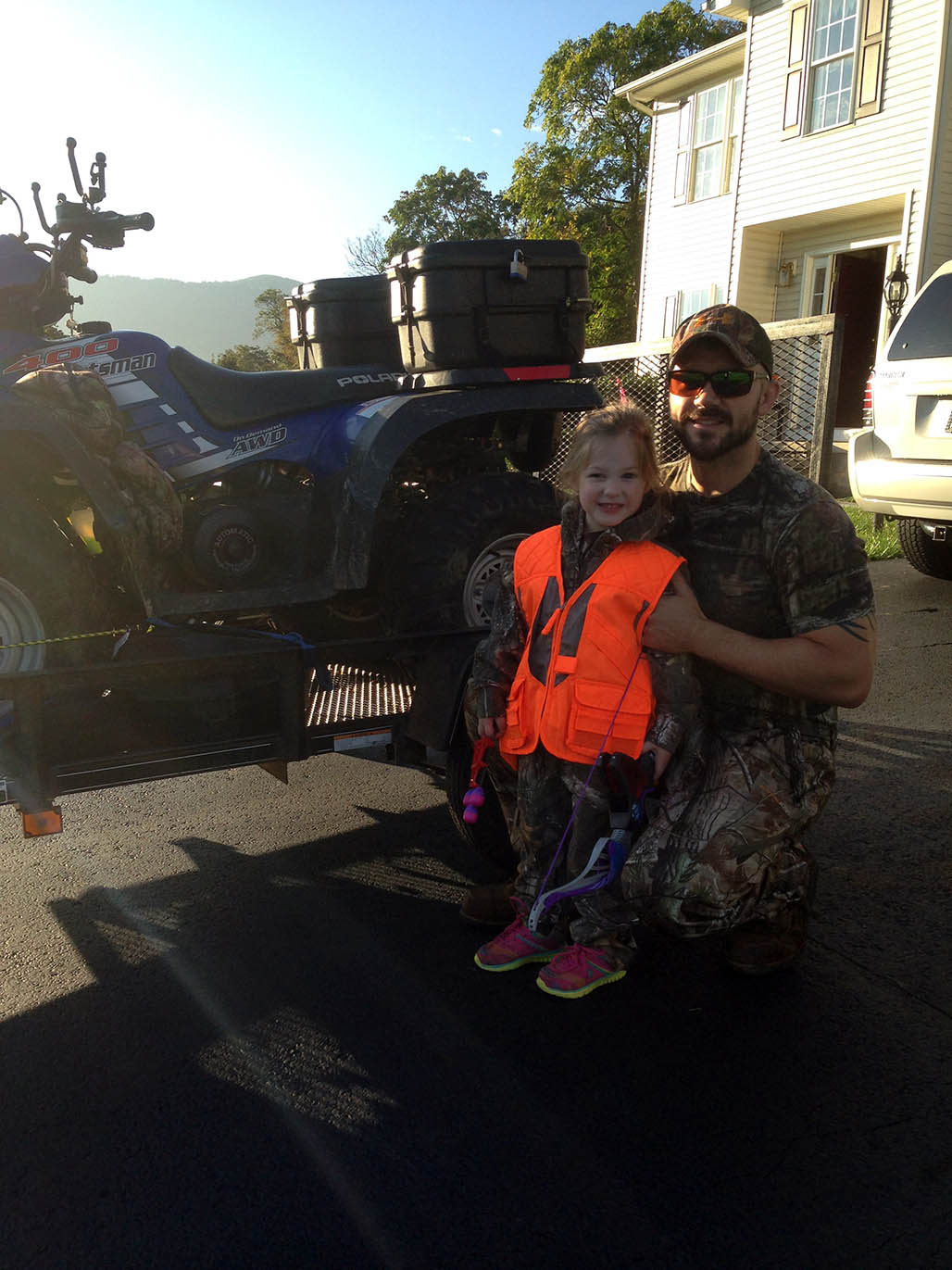 Dad and I were joking the whole way up about just how much of a disaster it was going to be. I expected her to be loud, 100 mph, and done with hunting within 10 minutes of starting. We contemplated even loading our weapons. I knew it would n’t be much hunting involved, but that’s not what it was about for me this time. When we got there, she went straight to some cattle the neighbor had penned up. Nice subtle shoes, right? 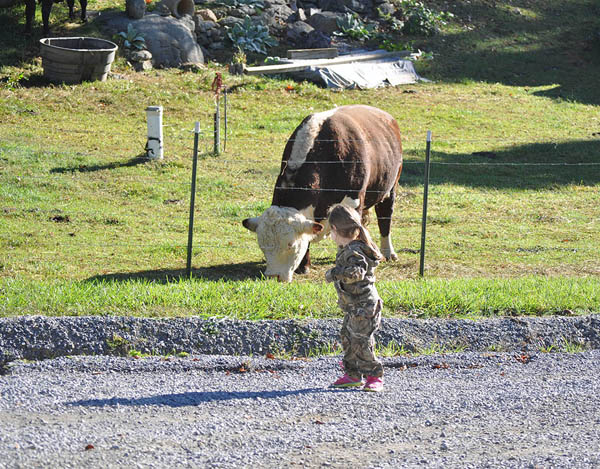 After she got that out of her system, we loaded up on the four wheeler. We gave her weapon the prime spot on the gun rack. 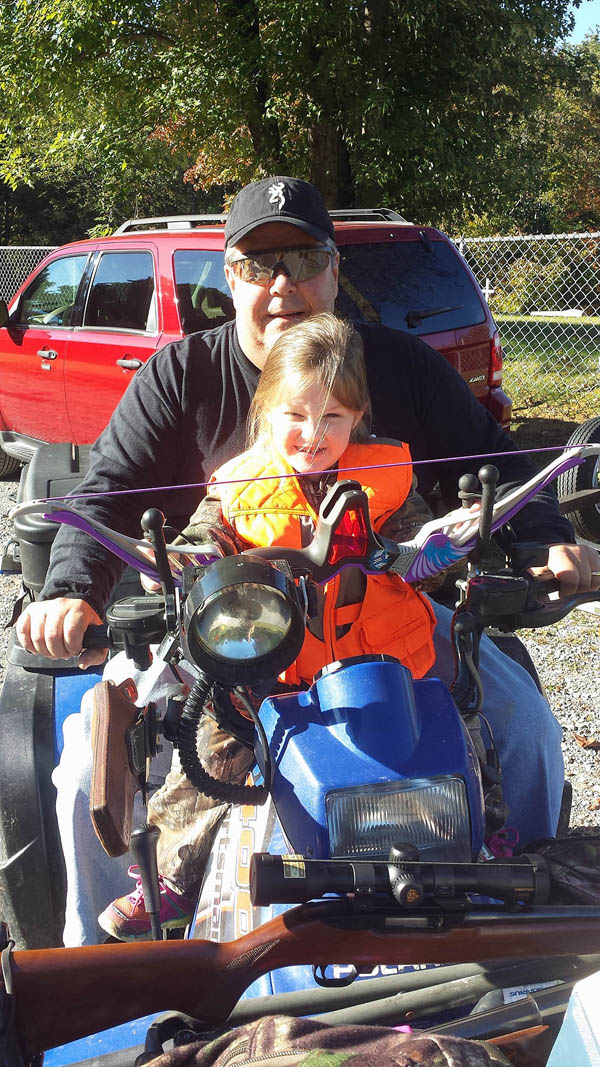 After a quick ride on the four  wheeler, we hopped off. I knew we’d have to be more proactive in the hunting and wouldn’t be able to sit for extended periods of time and wait. My dad just wanted to sit there and watch. I told her to walk beside me and be very very quiet so we didn’t scare the squirrels. After creeping about 20 yards, I realized she was surprisingly very quiet. This came as a surprise given she has flintstone feet like her father. I stopped to listen for the sound of acorns being collected or a bark, and had her stand beside me. I’d say we were there for about five minutes and I only had to tell her to whisper about three times. I quickly became more interested in how calm and content she was standing there with me than locating squirrels. I was so proud.

We walked back and I told my dad to just go change out all his game camera batteries while she and I just walked and learned. There are several things that if nothing else, I want my kids to learn from me. And one of those things is to listen and observe nature. Whether they’re fishing, hunting, or just being in nature, I want them to be aware of everything going on. I also want them to be able to take care of themselves and to be resourceful. Not that I’d be disappointed in either if they chose not to take from the land, but they would certainly know how to if need be. So I was going to take this time to school her a little. But shortly after we started our walk, her ADD took over. And I did the same thing I do when we’re fishing and she wants to throw rocks. I stood there and watched. 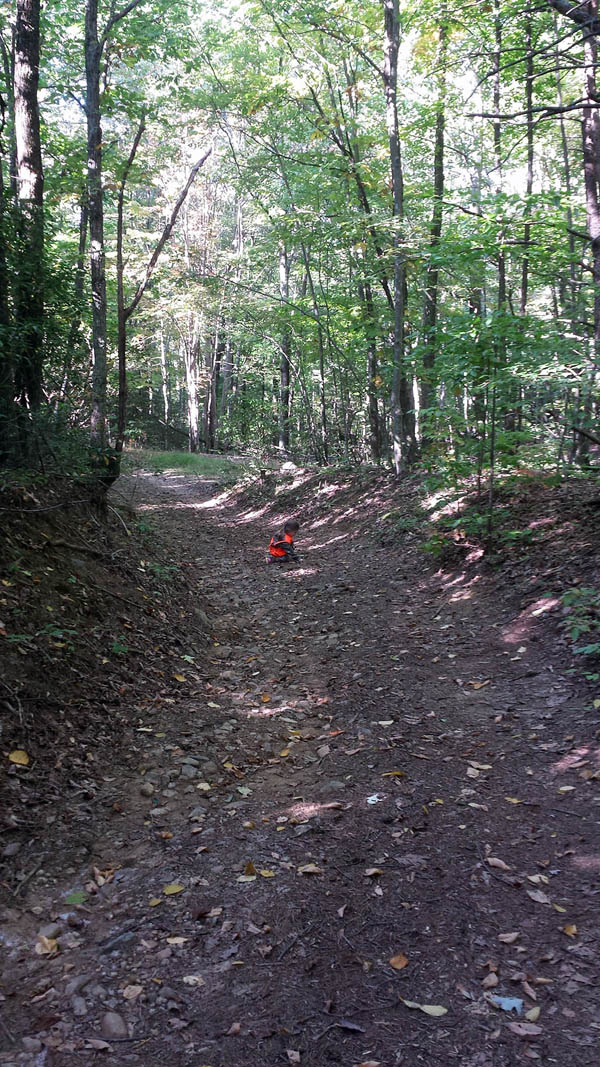 Once she was ready to get back on track, we walked the dirt road and just talked about the different things we were hearing and seeing. It was nice. I took advantage of any moment to teach her something. Like food sources. 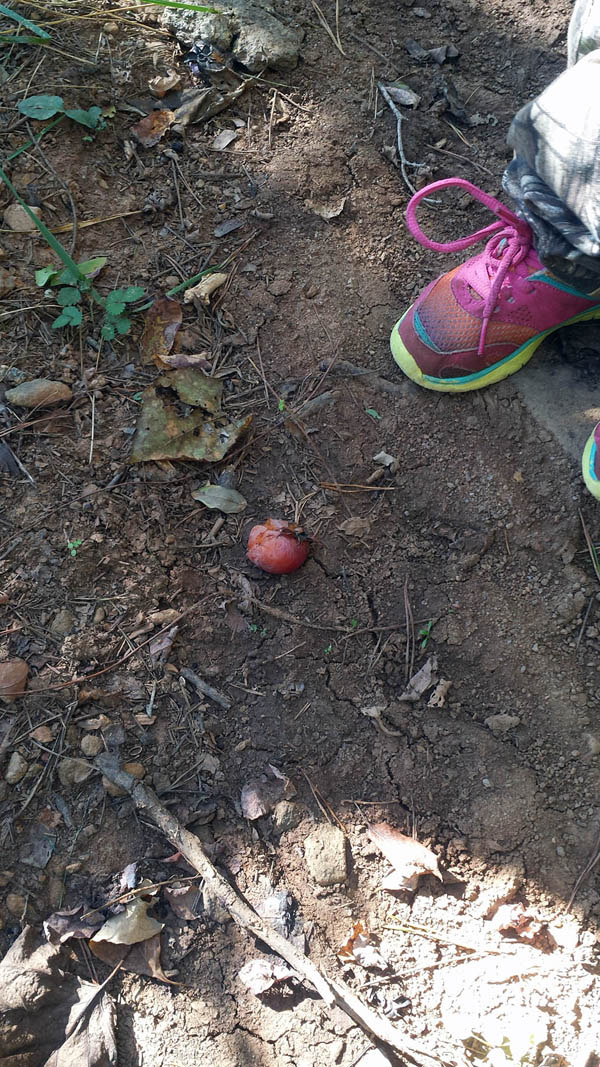 I asked her if the deer ate the persimmons and she corrected me by informing me that they were baby apples, and yes the deer liked the babies. So then I asked her to help me look around for a path the deer used to get to the tree. After a little scouting, we found more of a highway. 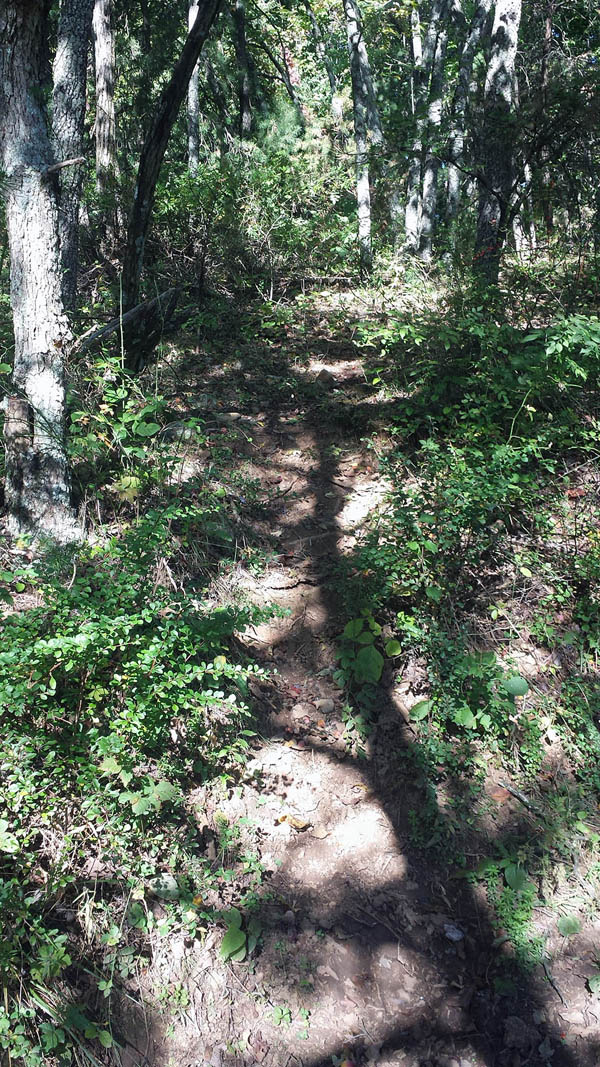 I found this guy and placed it on the path we were walking while she wasn’t looking. She spotted it and without missing a beat gasped, “A turkey feder! I get it. Here Daddy. For your fwies!” I smiled and put it in my back pocket. 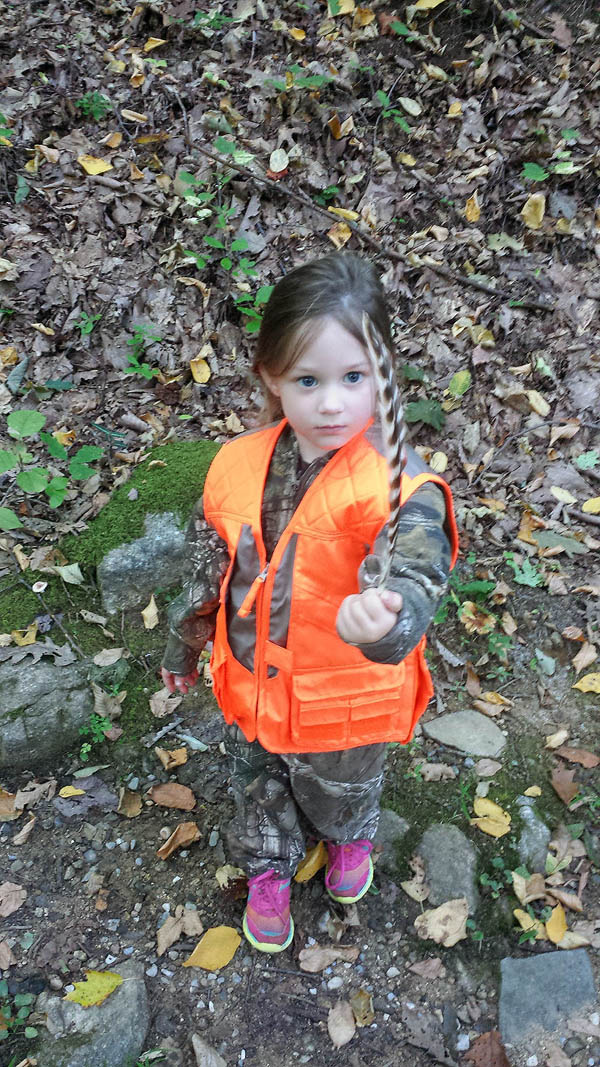 She was almost enjoying this as much as me. We linked back up with my dad and ate lunch. Since she hadn’t seen any squirrels yet, we had a little practice session with some targets. 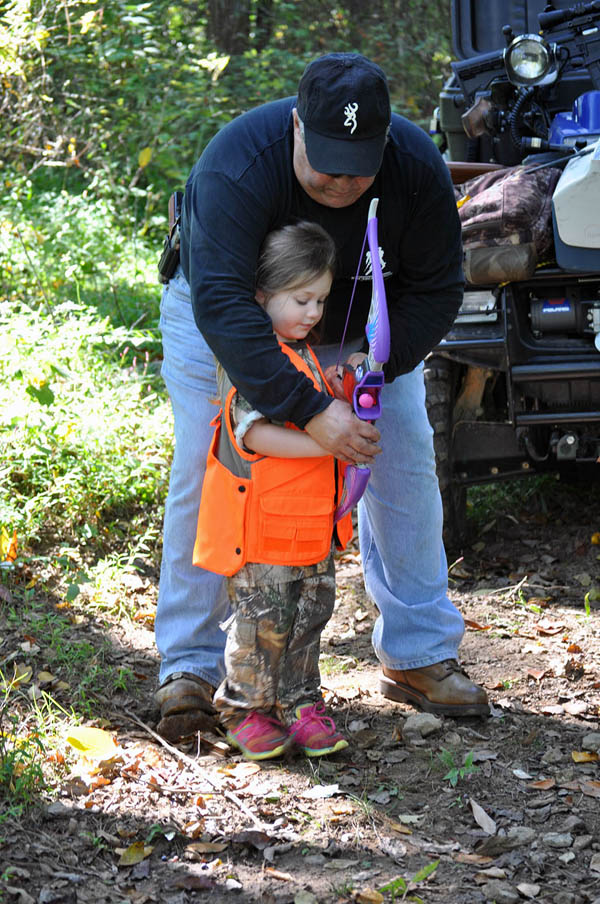 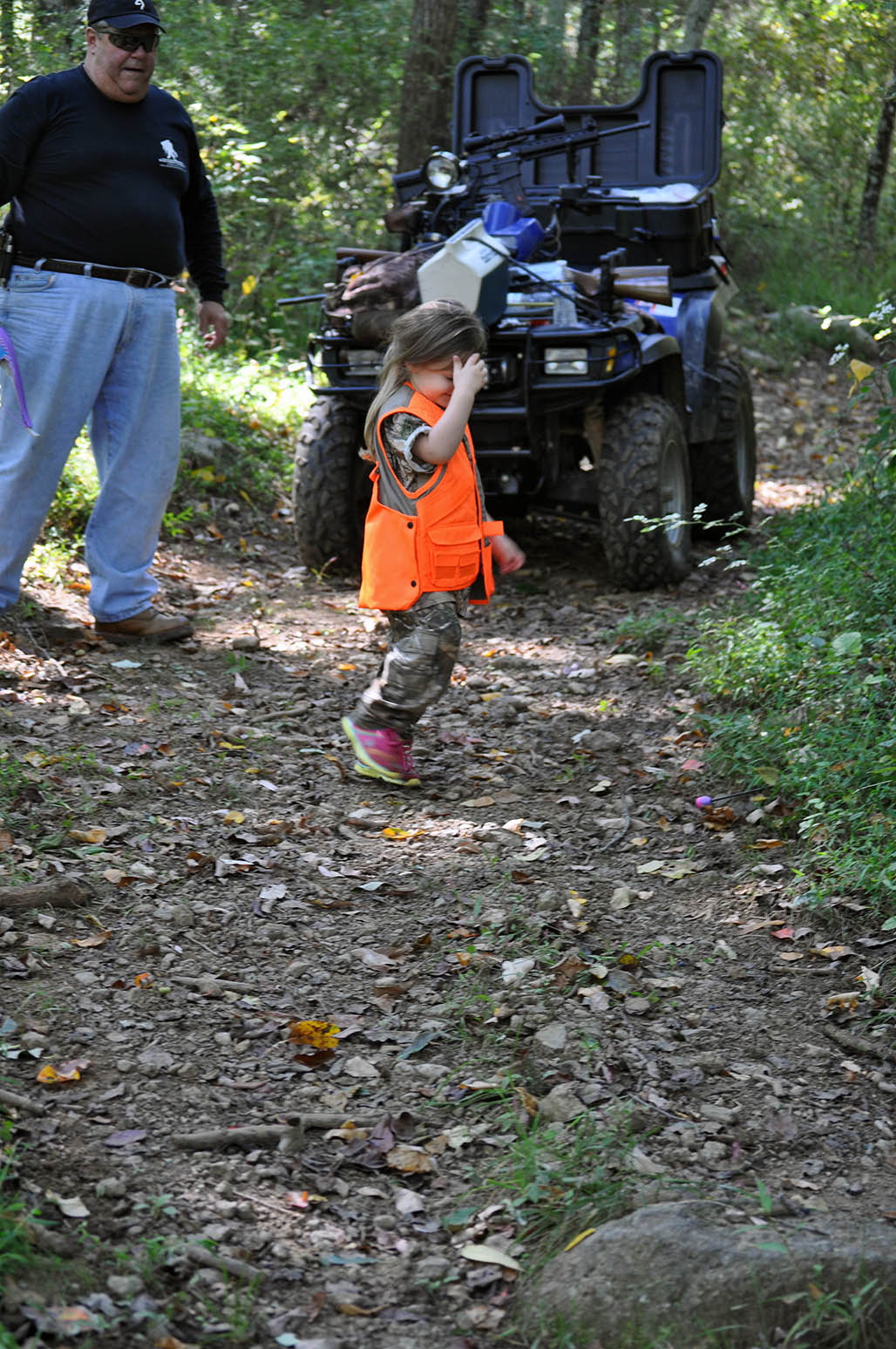 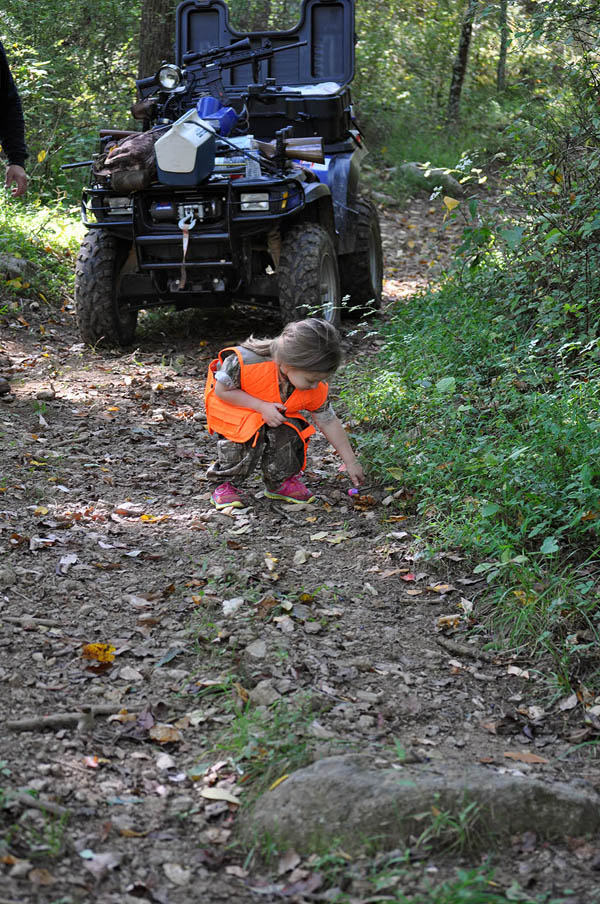 And showing us the arrow, just in case we missed it… 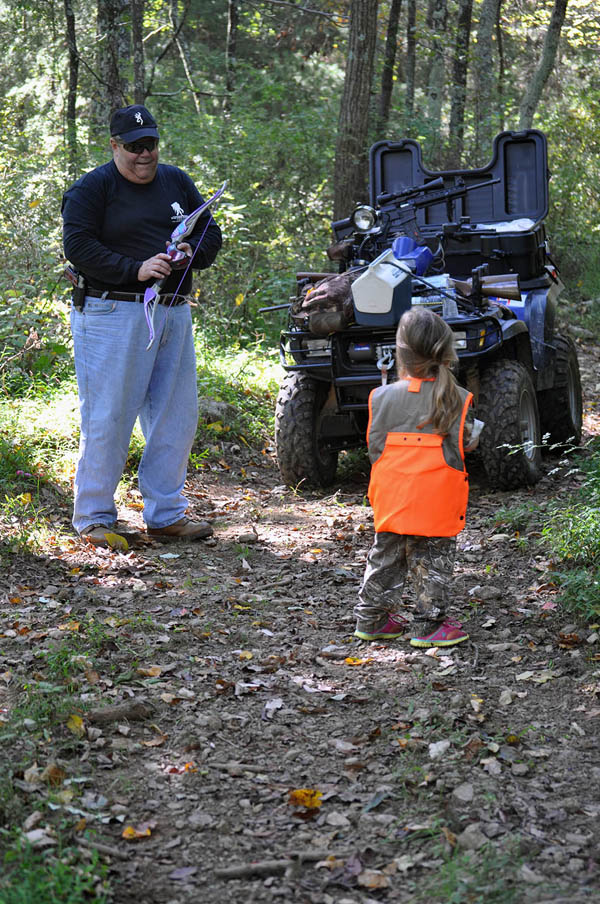 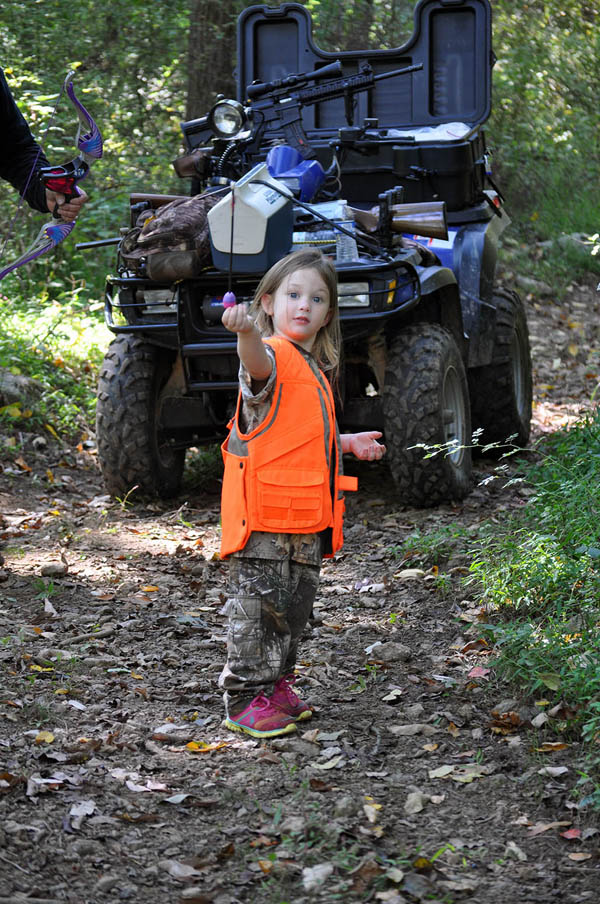 We took a slow walk back to where we started while my dad followed. I stopped at the gate to show her what to look for when trying to locate places squirrels might be hanging out. She was beginning to catch on to a common theme with the animals. 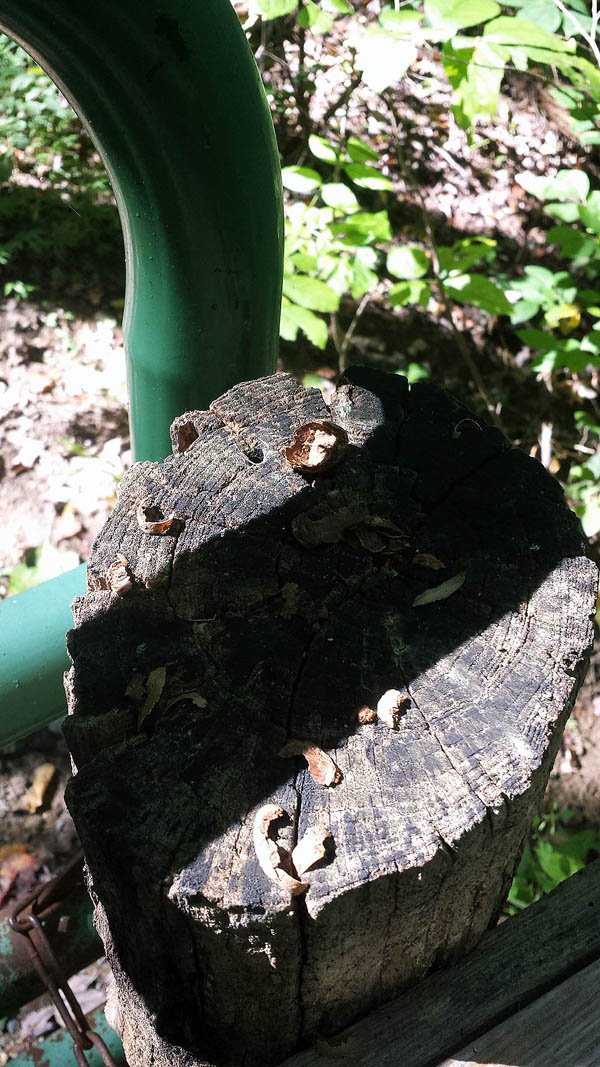 We rode the four wheeler back to the truck and loaded back up. We didn’t see a single squirrel in the couple of hours we pent in the woods and I was completely okay with that. I’m gonna go out on a limb here and say I think she was too. 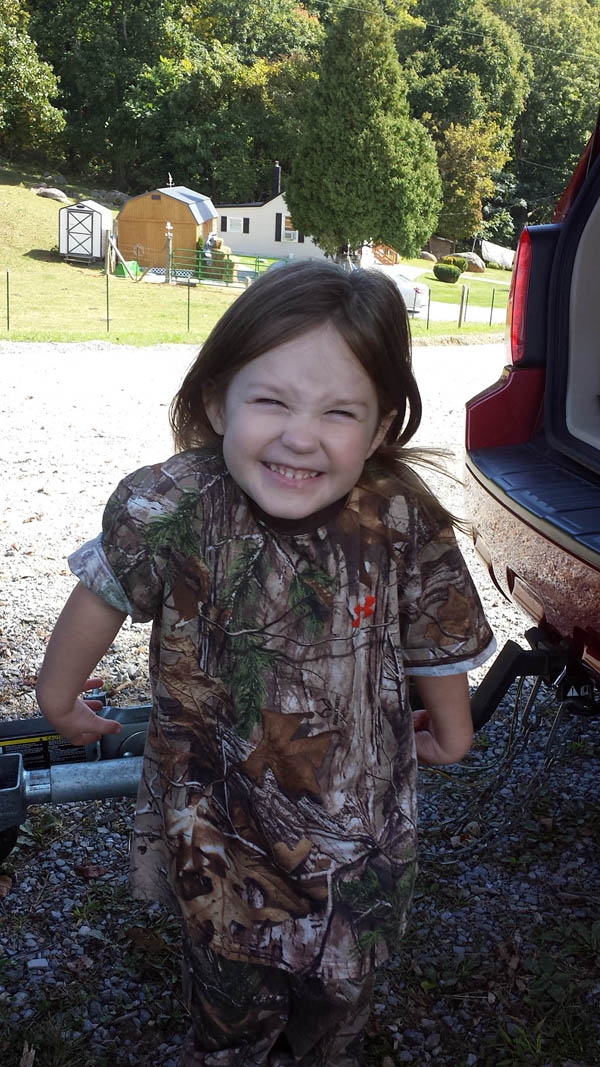 What we experienced out there was something I’d waited for what seemed like my whole life for. I always expected it to be with a son. It was by far the best time hunting I’ve ever experienced. I cannot wait to experience it again with her and in a couple of years, ol’ Wyatt Levi! This, ladies and gentlemen, is what life’s all about.