Restoration at its Best

One of the many great people I’ve met as a result of Project Healing Waters goes by the name of Harold Harsh. Harold is a retired Marine that started his own fly shop and guiding service out of Oakland, Maryland called Spring Creek Outfitters. Besides the local waters in his area, he even takes clients to places like Montana, Ireland, Labrador, Chile, and B.C. He has been a selfless volunteer with PHW since the program started. He and his wife Jana are generous donors as well. 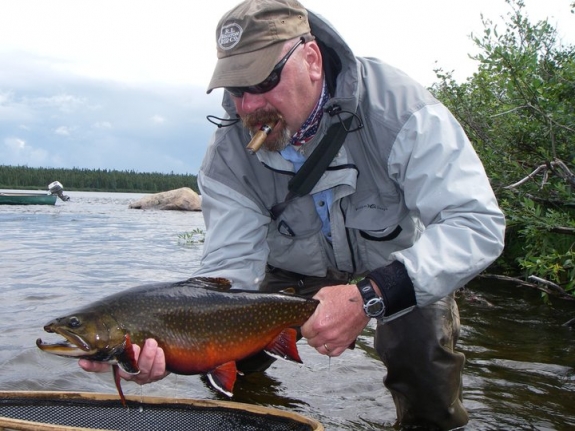 I met him in 2006 when I was introduced to fly fishing through PHW. He offered for me to come up to Maryland and fish with him. Do not ask me why it took me over six years to take him up on the offer… I finally did.  Harold and his wife Jana were gracious enough to tell us they didn’t mind Lisa and I bringing Emma Jo (aka Honey Badger) along. Don’t let the cute looks fool ya; she can get vicious in a hurry. 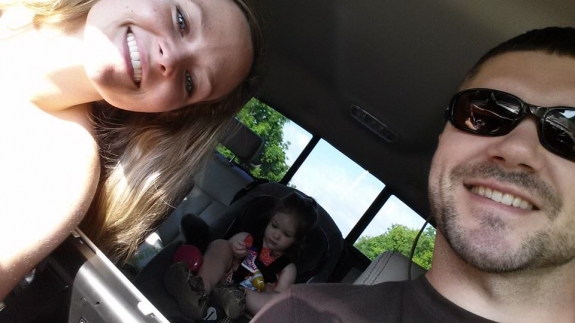 Taking Emma Jo on a road trip is like vigorously shaking up a coke bottle and twisting the top off- it never ends well. We took the chance and due to some grandpa driving up the switchback mountains, I managed to keep her from getting sick. It was one of the few road trips that ended well for the parents. We stopped at a West Virginia Arby’s on the way and were blessed with an art show courtesy of Emma Jo. 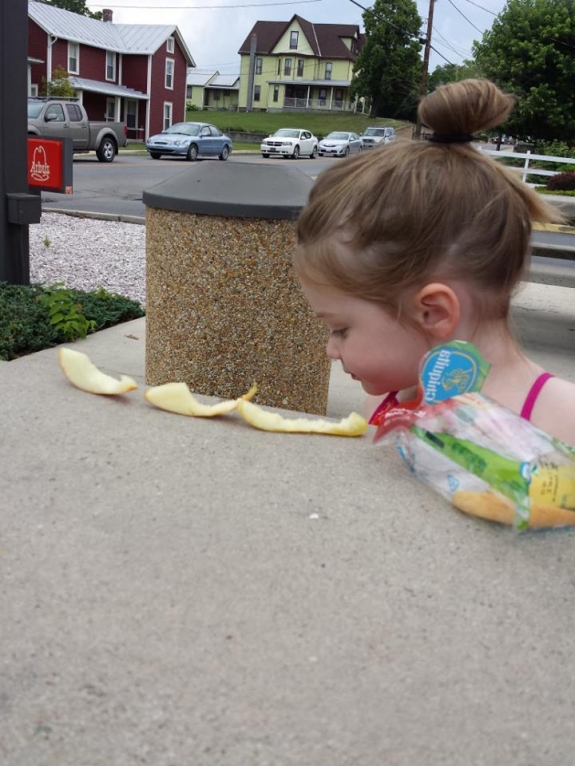 When we arrived, we were instantly treated like family. Harold and Jana made us feel so comfortable. There’s usually that awkward day or two it takes for people to really get to know each other and open up. You know what I’m talkin’ bout; any subject of discussion to keep the silence at bay and of course fake permanent smile faces. The kind that makes your cheeks cramp. We all bypassed that. Maybe it was because we were all too busy trying to keep Emma Jo from riding their cat like she does with our lab Dixie. Harold has a sweet setup in his house. He’s taken a bonus room above the garage and turned it into a fully operational fly shop. It was pretty cool. This is how a tying desk should look:  busy

The next day we hit up the North Branch of the Potomac River. Acid mine drainage had virtually diminished the fish population of this river until DNR’s Freshwater Fisheries Division, the Bureau of Mines, and some other agencies made it their mission to restore it. To say they succeeded would be an understatement. There are only a handful of waters on the east coast that anglers have the opportunity to catch the trout grand slam (brown, rainbow, brook, and cutthroat). This would be one of those rare places. And from what Harold says, it still hasn’t reached its full potential. The water and surroundings were beautiful. We put the raft in at the tailwater and immediately saw fish. The time of year I was fishing was when the isonychia hatch usually starts picking up, so most of the patterns we were using resembled an iso in some form. We worked our way down the water, catching rainbows and browns along the way. The coloration of this brown is proof that they’re succeeding in their restoration efforts. 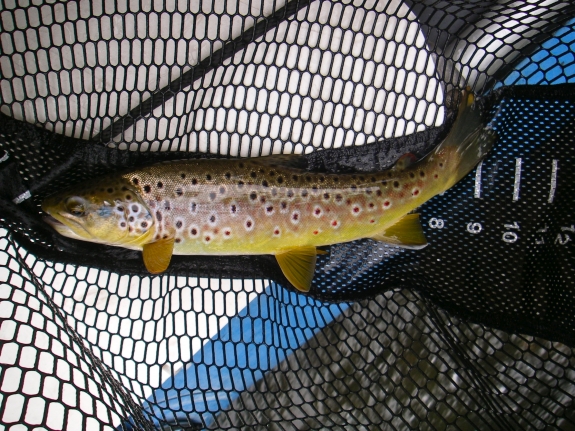 The wild fish there really had the torpedo look goin on. You know, that wild fit trout look. They were tough and educated. You really had to minimize drag and present well to fool these guys. They fought like champs from start to finish. Here’s a nice 16″ rainbow I picked up.

At one point, we saw a really nice brown feeding in front of a rock. He was coming up in a rhythm and I wanted him bad. We threw on a couple different dries, trying to get him to take one. I must have thrown for about 10 minutes. I was making certain not to let the flies drag, so he never spooked. Harold wanted to try a Griffith’s Gnat, so we tied one on. Boom. He opened right up on it. Snap. I had a knee jerk, or tippet snap, reaction. We were both pleasantly surprised to see it didn’t spook him. We determined that he just never really felt it since it happened so quickly. I threw on an iso and kept trying for probably 10 more minutes. After some frantic laps around the rock, he felt confident enough to eat it. I set the hook nice and proper this time and was thrilled when Harold netted the 18″ brown. Even got the Griffith’s Gnat back. After a nice streamside lunch, we started on the second half of the float. We started running into brookies in some fast water. I must have had at least half a dozen on for a second or two. I was not able to land any of my favorite species this day. I did however, catch a new species: a cutthroat. What a beautiful fish. You can really see why they’re called cutthroats with this close-up. 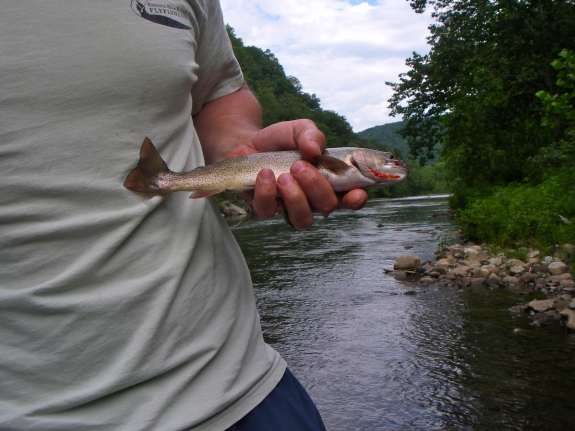 I ended up catching a few more cutthroats before we go to our takeout. What a great day of fishin’. On the drive back, we sat there replaying the day with stories. It was truly a remarkable fishery. And it helped that Harold knew the water like the back of his hand. We showered up and headed to Ace’s Run, which you should definitely eat at if ever in the area. It was a sweet vibe, awesome lake view, and awesome food. Emma Jo was actin’ a fool, so Lisa and I took turns taking her outside to walk around. Other than that, it was great. We spent the rest of the evening hanging out and talking at their place. Emma Jo decided to take one of their decorative frogs and amputate it. We named it Josh… The next mornin, as we were getting ready to leave, Harold asked me to come outside. I went out into his garage and saw a 12.5′ Perception Caster kayak on the slab. “What’s this,” I asked? “You and Lisa said  you wanted to try one out one day. Take it home and see how you do”. That’s the kind of guy Harold is. When we got home, we started to have torrential rain for the whole week. I couldn’t take it, so I decided to test out the waters in my yard. I’m that neighbor. 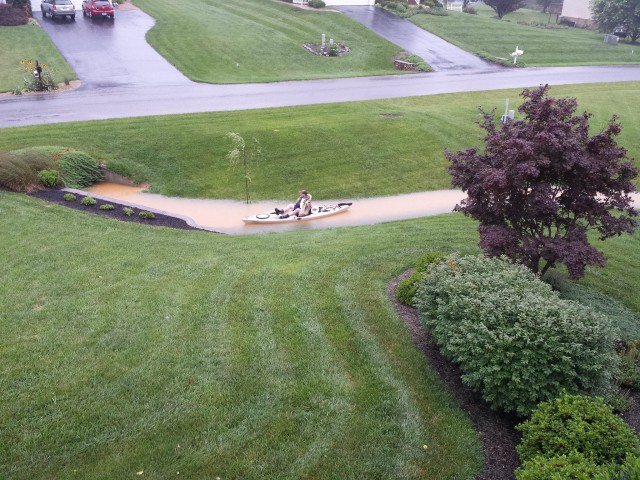 I’ve had the opportunity to actually get out on some water with it and am getting better with each trip. Harold told me to give it back “Whenever”. To sum all this up:  When you meet someone like Harold, don’t screw the friendship up. It’s a rarity. 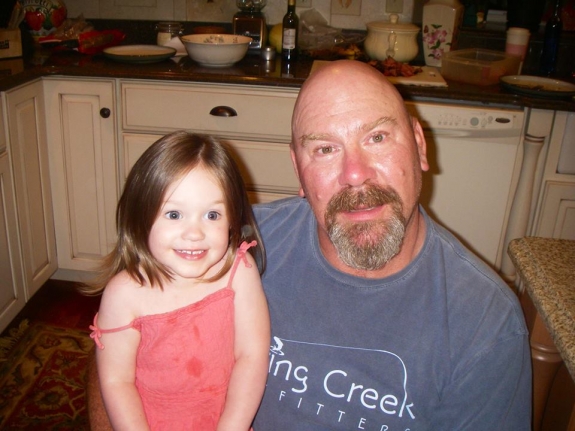 Tying the Wooly Bugger So This is 30