Ever since being deployed in Iraq, I’ve had an elevated sense of awareness that comes with spending some time in a war. The kind of awareness that causes you to evaluate everyone in the room when you enter, look behind you periodically while walking down the street, and trust no strangers. Most of those I served with carry. Some people would say war veterans are just paranoid, trigger-happy gun toters. I would argue that those same people are blind and naive to the true dangers out there. Does carrying a weapon always save a life? No. Do those who carry have a better track record than the absence of one? You betcha. While I believe more people should take their security into their own hands, I cannot dismiss the fact that some people should not be carrying. No problem. My point here is that today, more than ever, the unimaginable happens to innocent people on a daily basis. The rise in anti-gun laws seem to parallel with the exponential growth of crimes. For over five years,  I’ve carried my FN Five-seven in a soft, cheap IWB holster. It sat with no cant, was quite uncomfortable, and made me sweat. I couldn’t hide it when I had a shirt tucked in. Because it sat so high, I was constantly having to adjust my print any time I bent over in a tee shirt. So I bought a Ruger LCP to carry when I was dressed up or had a shorter tee on. Although the LCP is a great little defensive pistol, it lacks in accuracy and some would say stopping power (but that’s a separate can of worms). I just didn’t feel 100% confident in it for every circumstance. For example, it would be just fine if I was attacked at close range. But what about if I were in a movie theater for example? I would be very apprehensive shooting that short pistol at any considerable distance if needed. You can’t just think about your safety. I can’t imagine having to live with one of my bullets hitting an innocent person due to an inaccurate short barrel pistol. And if you have doubt of any sort, that can be a very bad situation.

So I decided to buy a nice IWB and to start carrying my shorter XD-40 in it. I found a couple companies that had some great holsters and narrowed down the style I wanted. Then I remembered my buddy Dan had told me about this company called Half Cocked Holsters that he bought some stuff from. I decided to check them out and see if they had anything to offer. First, let me start by saying I love buying from the small business type. Being as I have a small business, I know how tough it is to compete with big companies. I also know that almost always, the quality and customer service that comes with the small businesses is incomparable. What made it even better is that this company was formed by two soldiers. I got to talking with the owner, Brad Byrem. It was very apparent that my satisfaction was his number one goal. It was also nice to find out he gives a Military, LEO and First Responder discount. We bounced emails back and forth, and with each reply to a question I had on options was his reassurance that if that option wasn’t what I had envisioned, he’d fix it. I felt very comfortable buying this, which is rare with custom products. Most always with custom products, you get what you get. No refunds, no exchanges. I asked Brad if I could do an interview on the business and hopefully relay to others the quality I had experienced. Here’s how it went down…

DDO: So how did Half Cocked Holsters come about?

HCH: We started in Jan 2014. After I came home from Afghanistan, I was tired of using crappy push button holsters and holsters that only came in black, tan or green. We saw how many colors and designs were out on the market and felt as though people should be able to choose what they want, and if you pay for something you should be able to get it as custom as you want it to be.

DDO: What would you say is your mission statement?

DDO: I think your mission statement is off to a good start dude. So tell us a little about your lineup.

HCH: I offer a plethora of products. All kydex and kydex/leather hybrids. Holsters: IWB, OWB, IWB/OWB, paddle, tek lok, drop leg, pretty much whatever someone wants I will try and make it. Knife sheaths, dip can holders, pistol mag holders, rifle mag holders, tool holders, ID holders, and anything someone comes up with I will try and make, as long as it comes out looking good and works I will try it. I won’t sell something that looks bad or doesn’t work.

DDO: That’s a great outlook on quality control. Do you have any new products in design phase?

HCH: I am always working on new things, either things I think up of, my co workers come up with or ideas that customers ask me to do. I have a lot of people that want specific things and the big time companies won’t do it for them, so I try and make what they want.

DDO: Where do you see the company in the future?

HCH: Right now I am super small, as in just me doing everything. My business partner that I started with recently stepped out and I took over everything, so now it’s just me. In the future I hope that I am able to do this only, and branch into other full leather holsters. I want a name of quality and integrity. I want people to choose my company over others because of our customer service and the amount of effort that I put into my work. I’ve gotten completely done with a holster before, not liked something about it and started all over. If I don’t like it I won’t sell it.

DDO: I think word of mouth from other customers is going to be your friend… So where can people get a hold of you?

HCH: People can either go through my website www.halfcockedholsters.com, pm me on any of our social media sites, or email me at hcholsterscolorado@gmail.com. Soon we will be selling on amazon and some on ebay.

DDO: For you, what are the important things in life?

HCH: The things in life that I love… My wife, she is awesome and so supportive of me. We get along great and do a ton of things together. My dogs, one is an American pitbull and the other is a pittbull/mastiff mix, they are great dogs and very protective over my family and their house. Love to go shooting, fishing, almost anything outdoors. Gym time is a steeple of my life, and my close friends that I have had forever and the ones I have formed bonds with through the Army and war.

DDO: So where’d you grow up?

HCH: I grew up in southern California, but quickly realized I would never go back there to live; I like the country to much and traffic there drives me insane.

DDO: Ah ha. So you’re an educated man… So we’re about done here. Is there anything else you wanna say?

HCH: My big thing is that if someone orders something from me and they are not completely satisfied with it, tell me and I will either fix it for them or make them something completely new. I have yet to have anyone say they hated their product and wanted to return it and I hope it stays that way.

After the several emails, we got the details all squared away. Although the holsters come with plenty of options, I went low-key for my IWB Hybrid with black for the leather color and OD Green for the kydex color. I had discussed with him that I probably wanted a little more cant than the 10 degree. He tried it on himself after making the form and after a few adjustments, went with about a 15 degree cant. Here’s a direct quote from an email from Brad, “It should be awesome, if it isn’t exactly what you are looking for when you get it, let me know and I will keep changing it to fit your needs. No point in ordering something custom if you cant get it custom to you”. I mean come on… Customer service doesn’t get any better than that y’all!

I was really happy with the quick time it took to produce the holster and send it off. When I got the package, it came just as I expected it to look. I was honestly really impressed with the workmanship that went into the holster. I tried the bad boy on and instantly loved the way it felt, drew, and kept no or a very little print. It looked very concealed with a tee or with a shirt tucked in. One thing you must consider when deciding to carry is how you wear clothes. If you wear loose fitting tees, you should have zero print. If you’re in that awkward in between sizes predicament like me, you have to be prepared for a slight print on things such a tee shirts. Remember, the point of concealed carry is for it to be concealed. Carrying an M4 around inside Wal Mart doesn’t make you a patriot. It makes you an antagonist. If you want to fight for gun rights, join your local Citizen Defense League and channel your intentions in a more valuable manner. I don’t want people to know I have a weapon on me.

Here is what you can expect things to look like with a button up untucked. 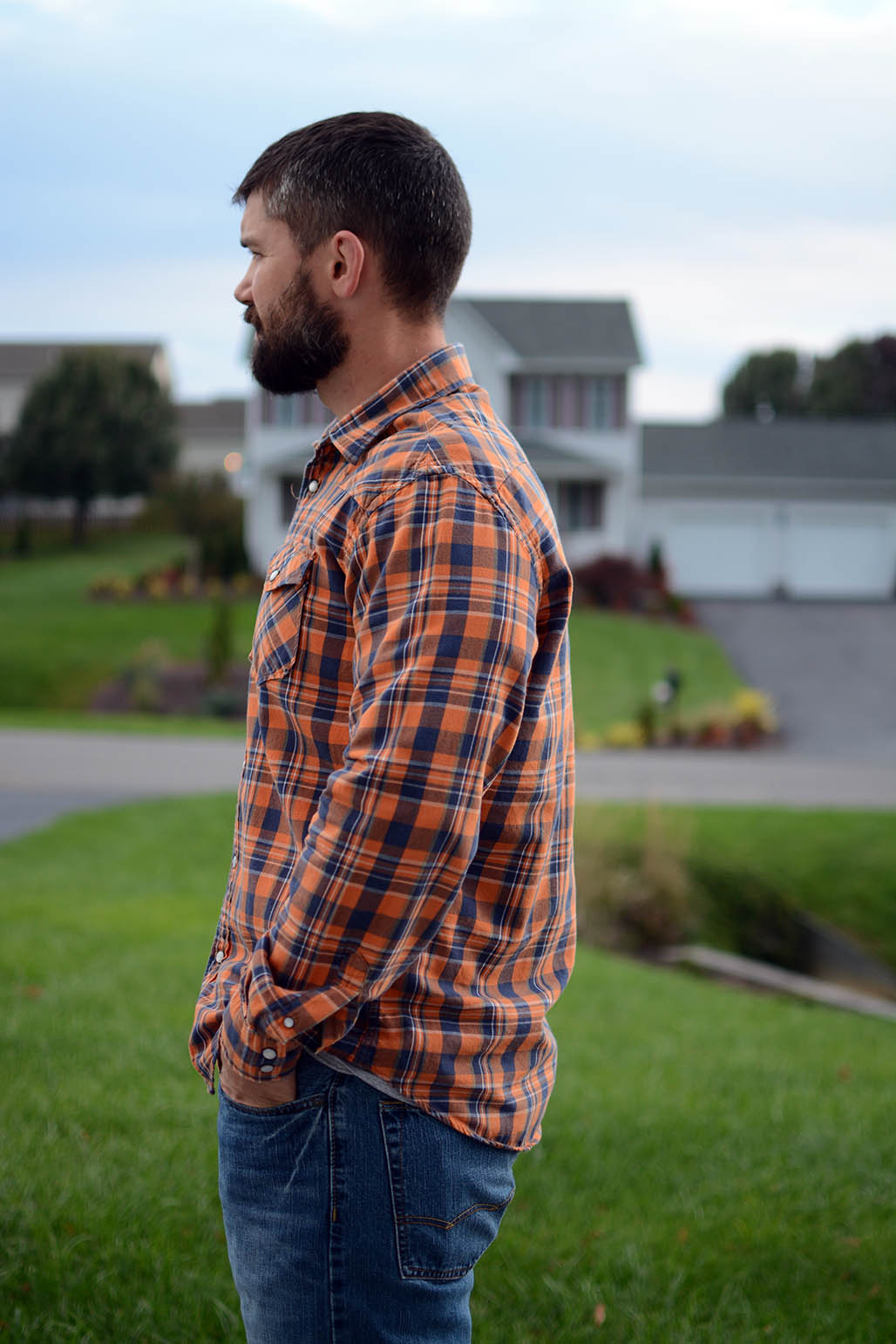 And here is what things will look like with a tighter tee. As you can see, it’s obvious to onlookers something is under the shirt. 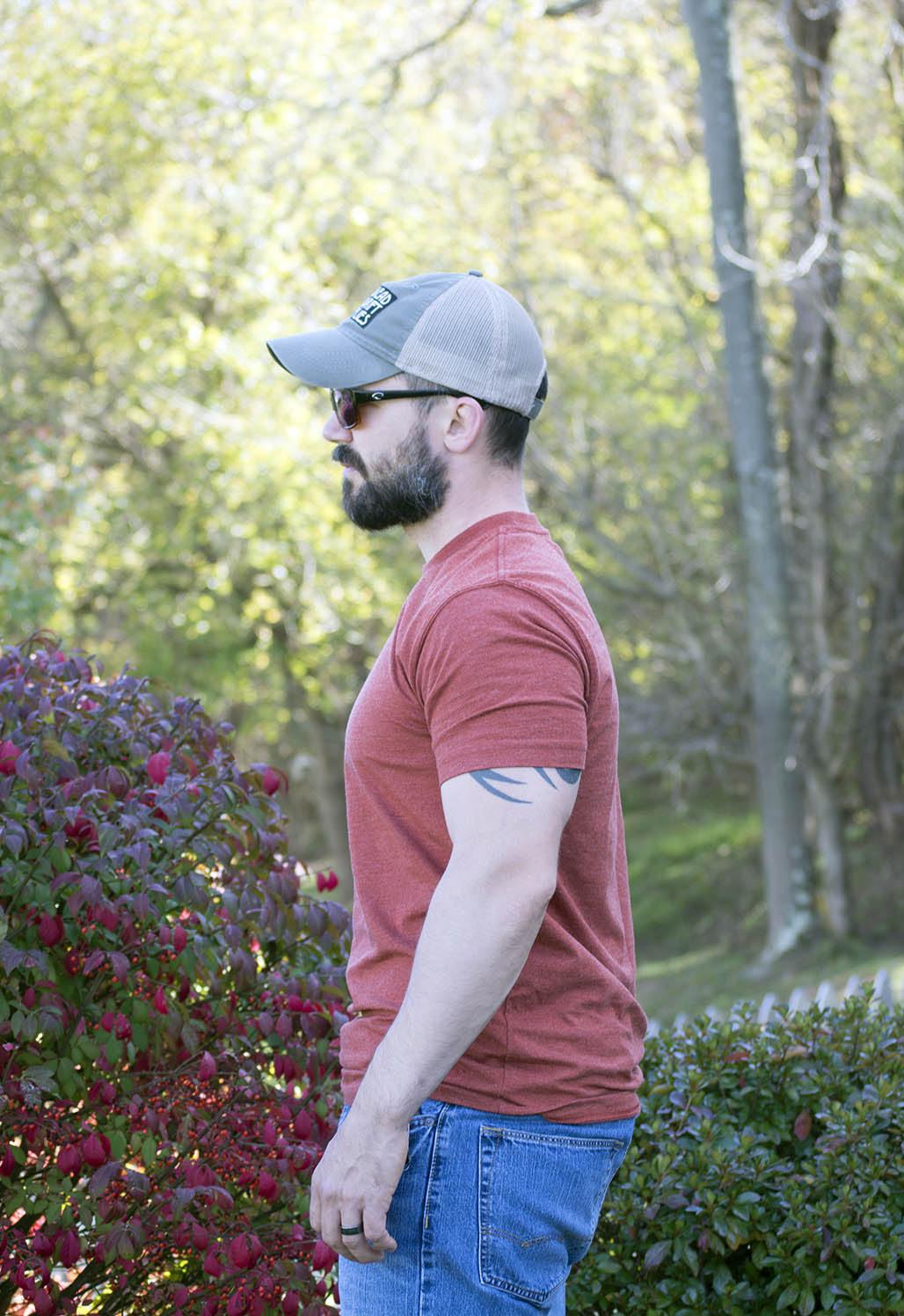 This holster allows for the ability to wear it while wearing a shirt tucked in. This was crucial for me, a I’m in that situation more than I’d like… Although the two clips are visible, the pistol remains concealed. 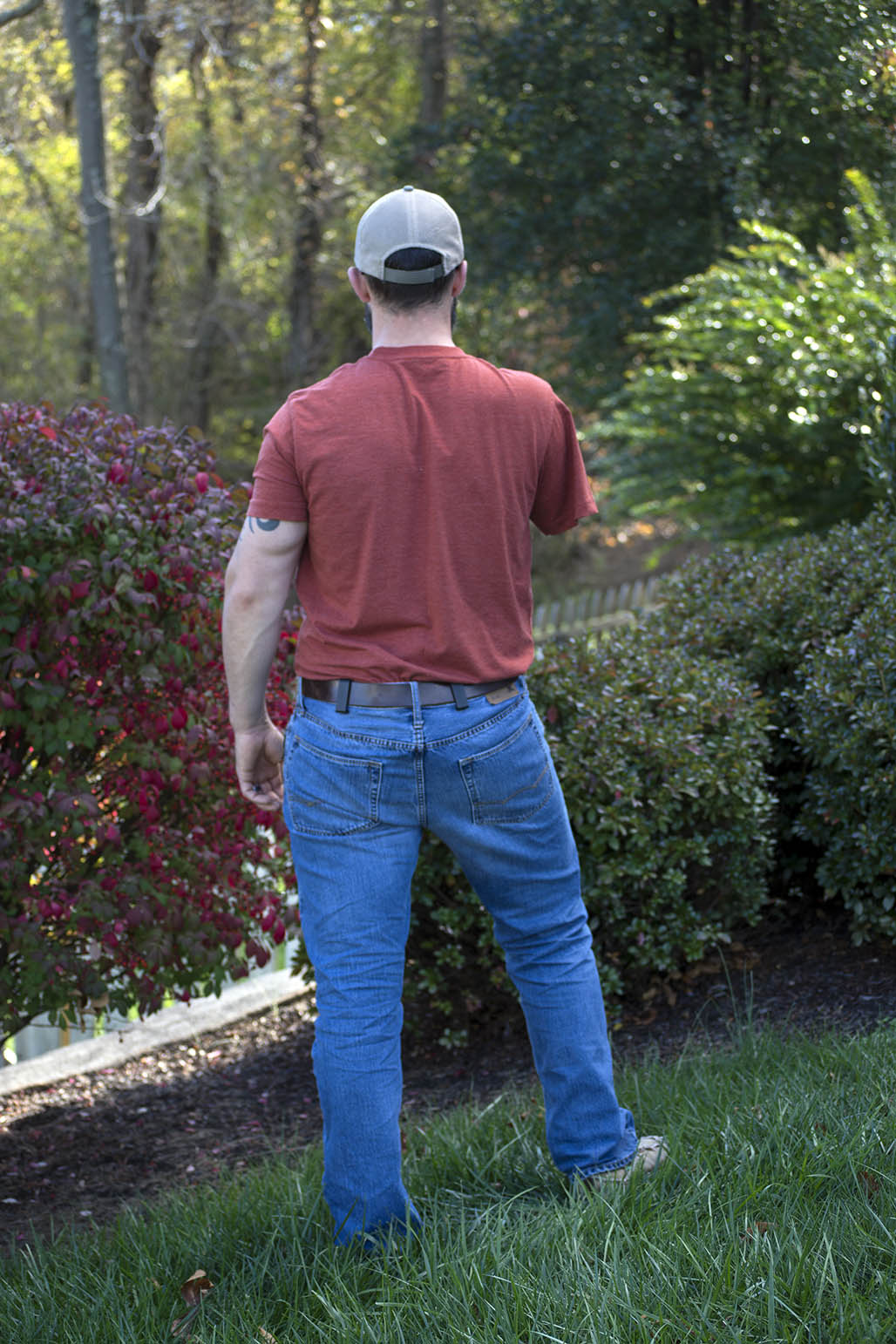 To draw with a shirt tucked in, you should practice pulling the shirt up  and the pistol out in one smooth action. Remember that when you train with your weapon, from drawing to shooting, wear the same clothes you would during your day to day travels. You don’t want something like different clothing to inhibit you from reacting as efficiently as possible. And for that matter, train with the weapon(s) you plan on using too! This is a very serious consideration. You won’t be drawing your weapon unless you or your loved ones are in a life threatening situation. Here’s a slide show of a draw from the tucked in stance. 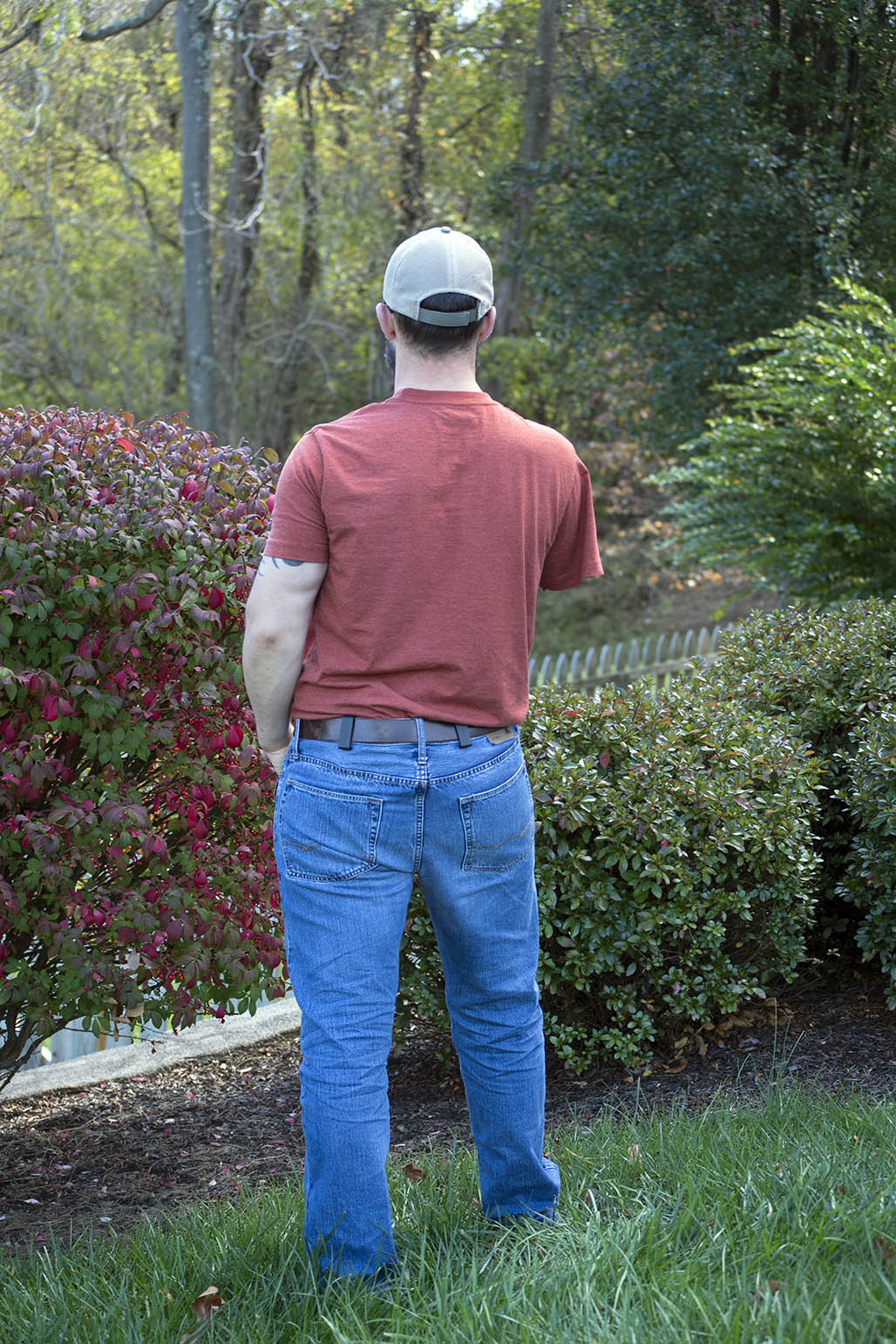 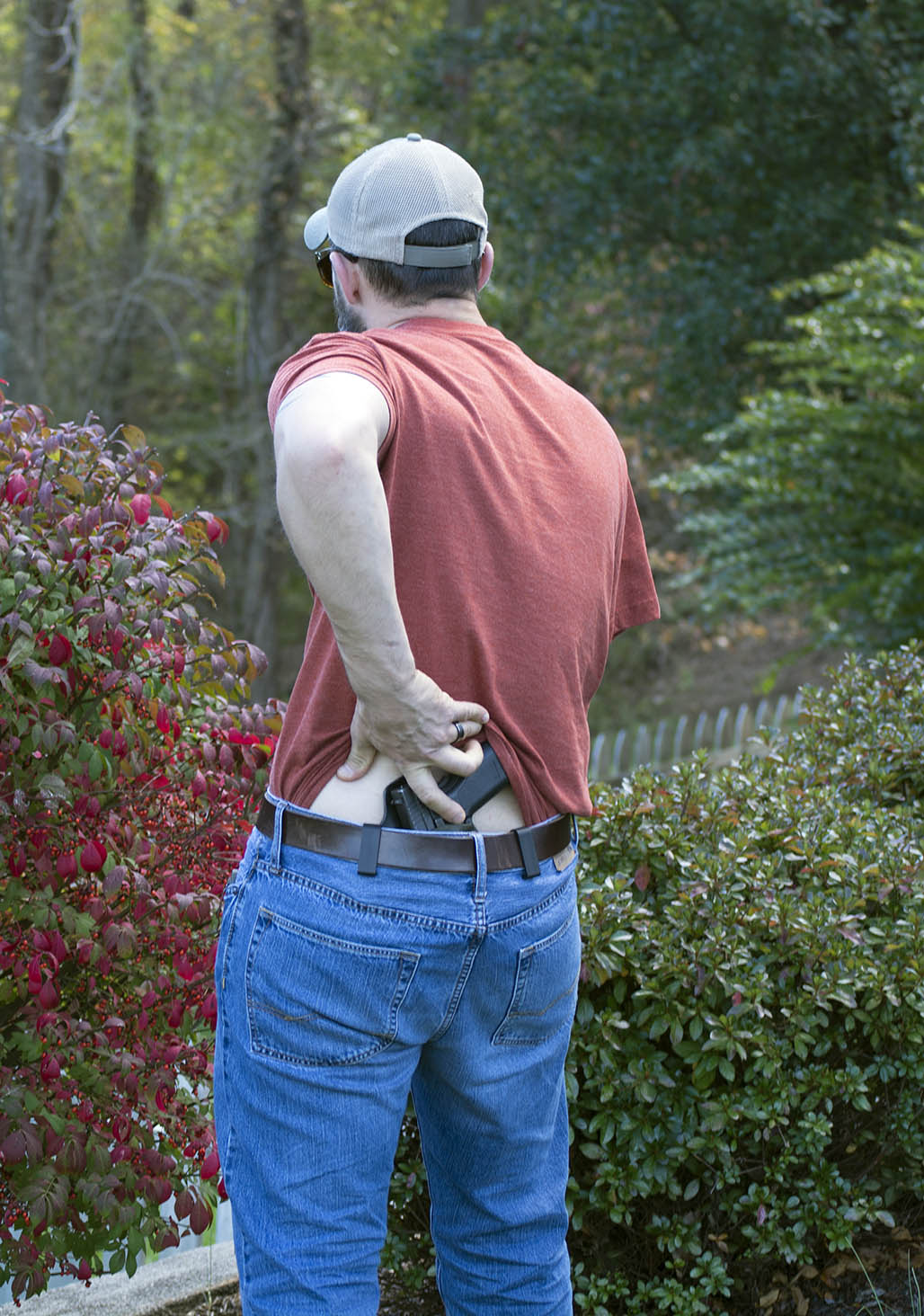 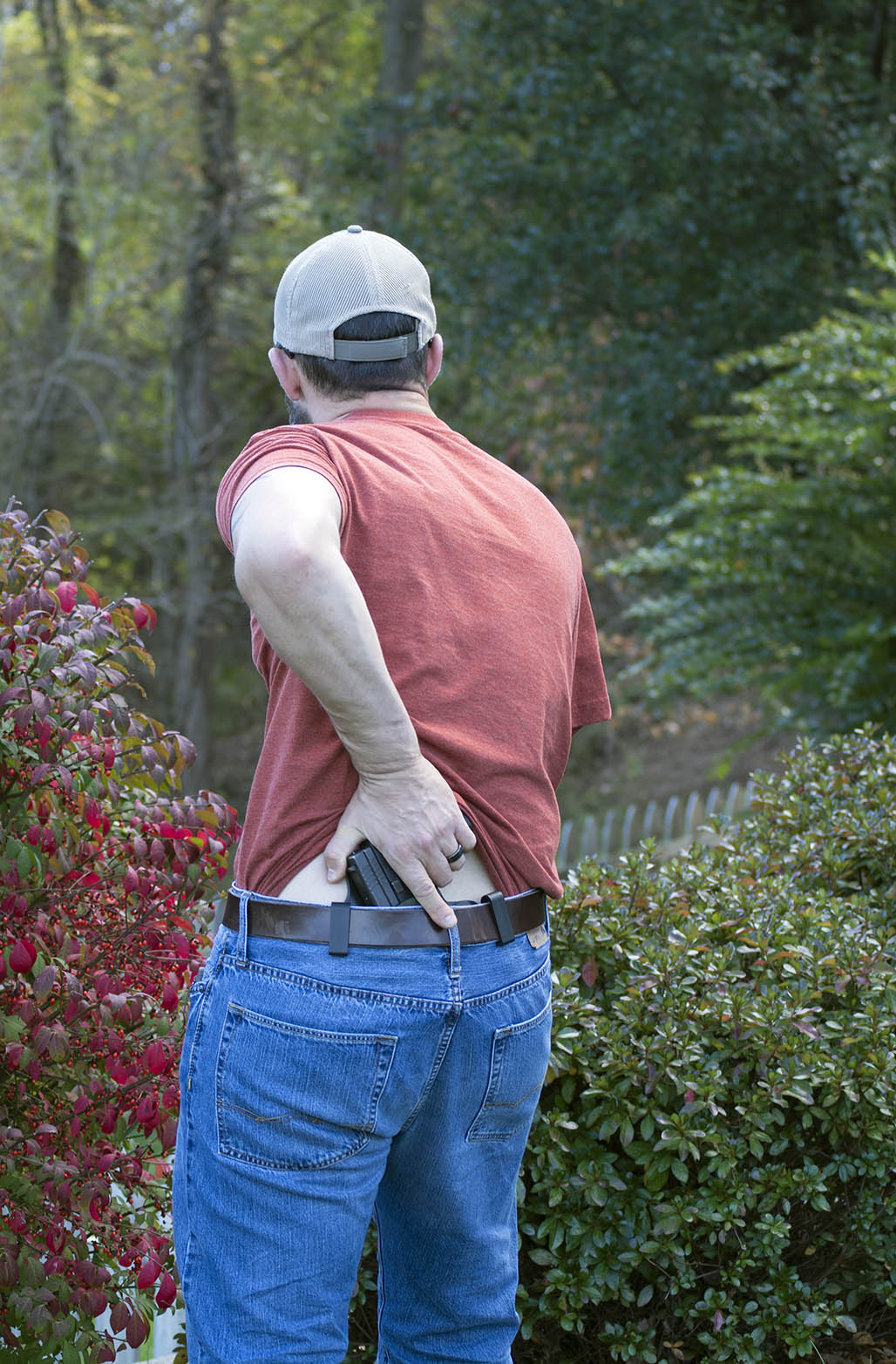 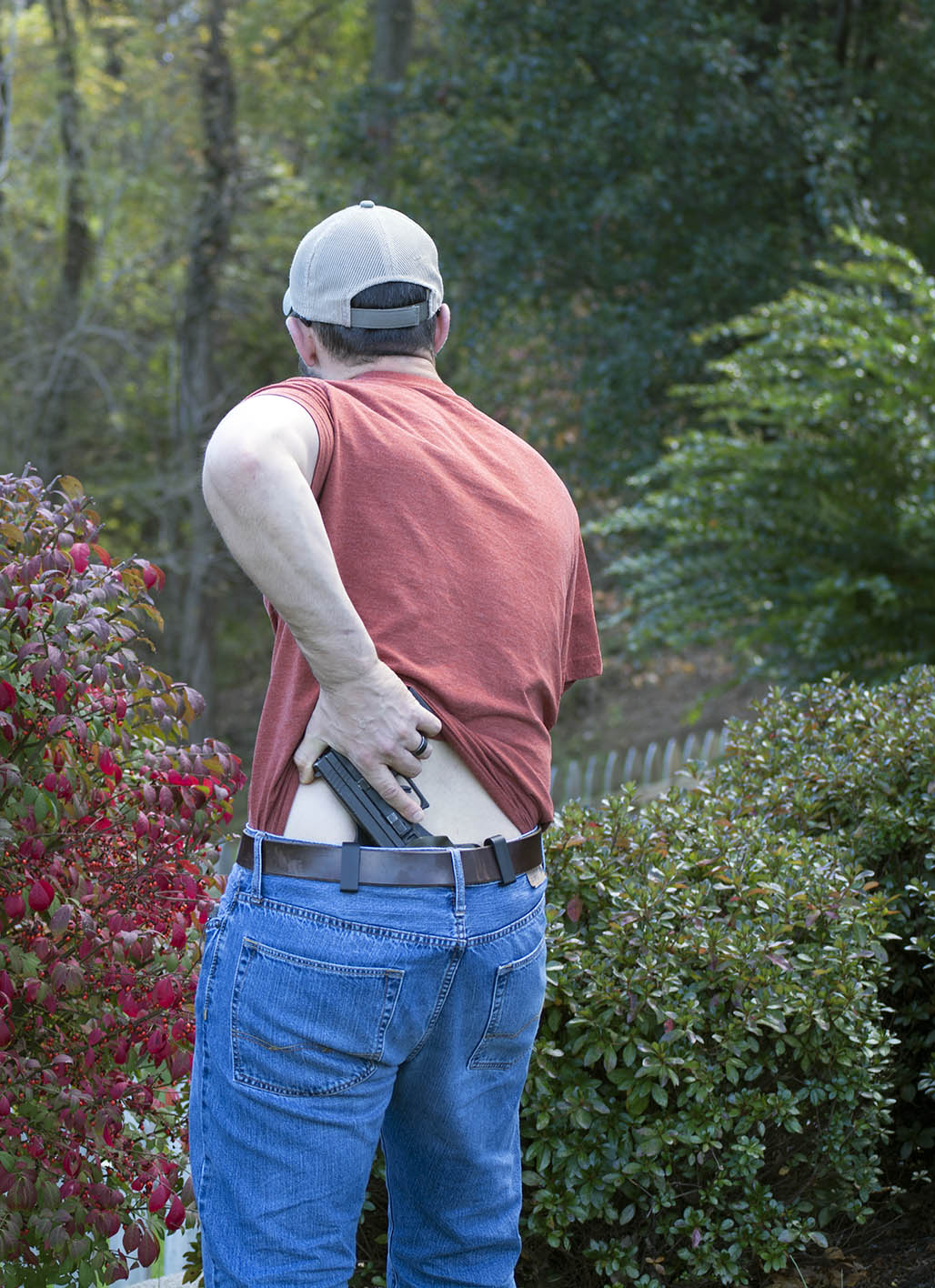 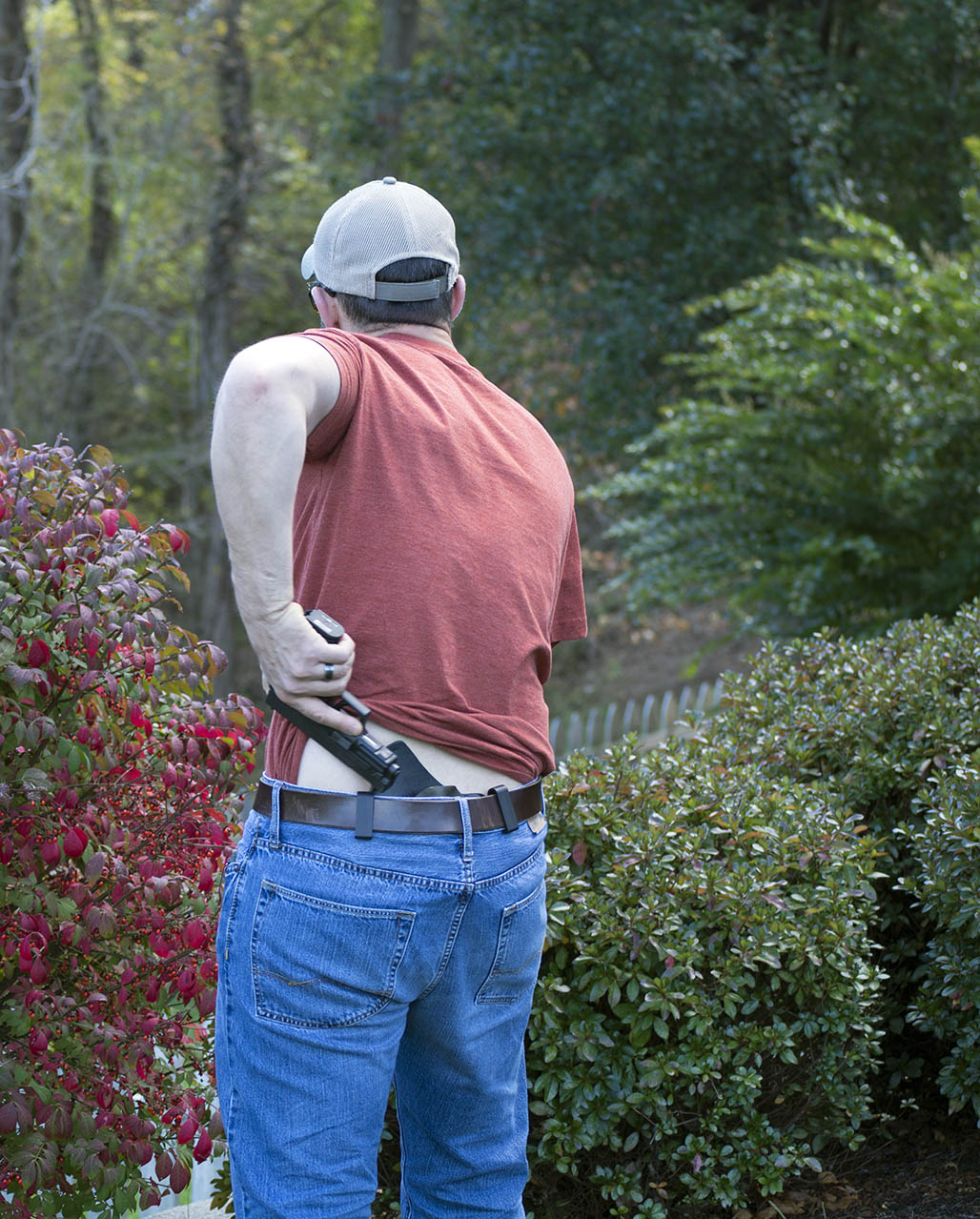 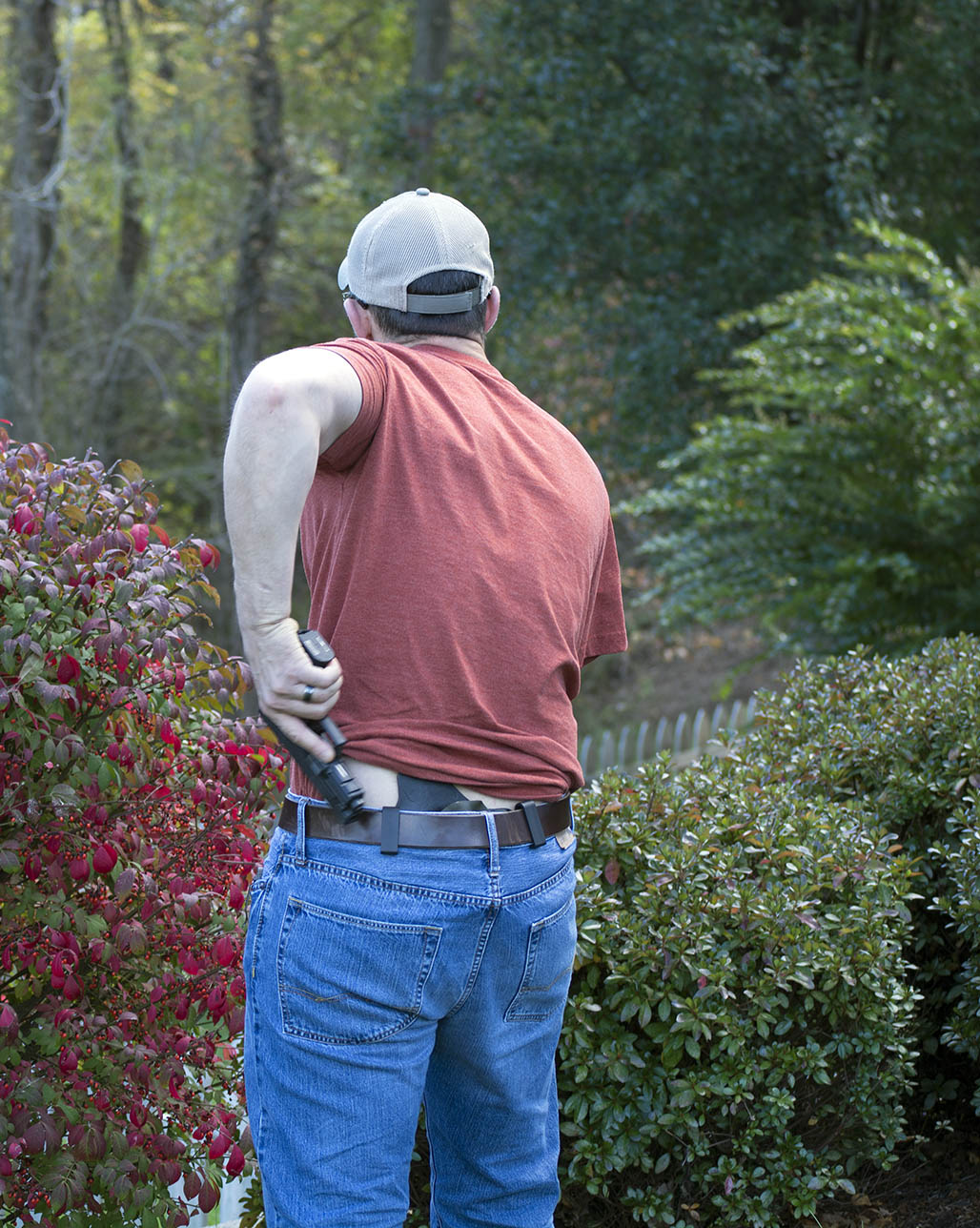 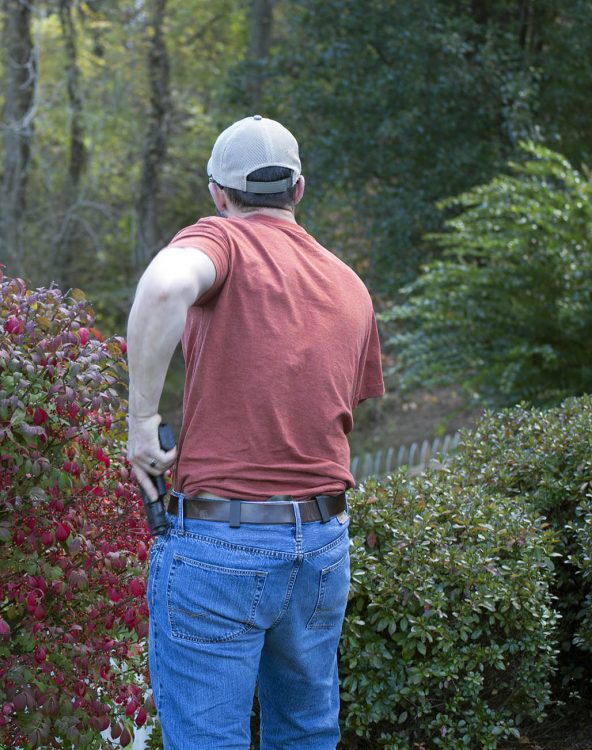 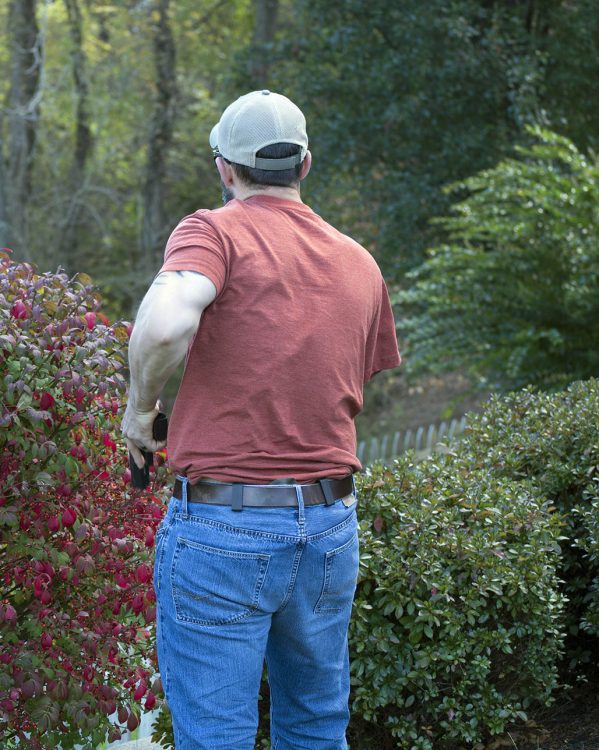 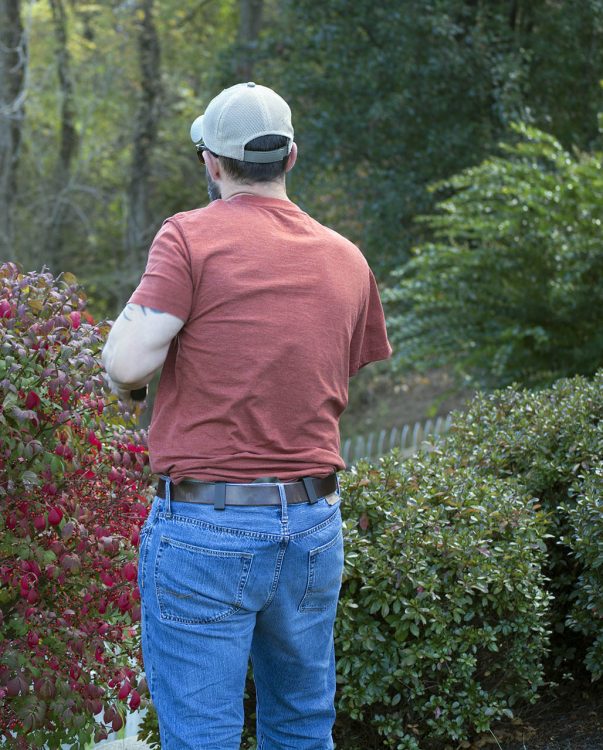 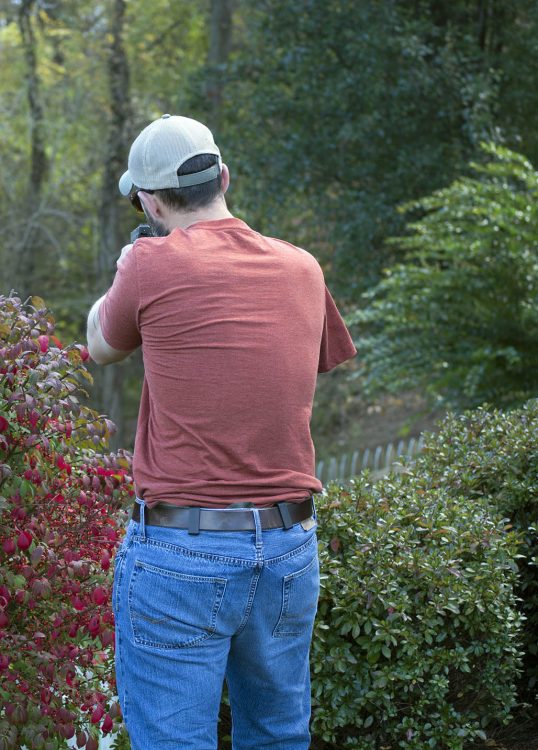 After some time practicing, I decided to position it more on the left cheek. But everyone is different and should seat it where they feel it most natural. I’ve had several months to try it out and really make sure the quality is there. I’m telling y’all, the quality is there. It has easily become my favorite holster I’ve ever had. Brad and I also got on the subject of fly fishing (not a surprise) and PHWFF. He actually sent off some PHWFF auction items, which I thought was very cool. So in case anyone reading this didn’t pick up on the vibe I’m throwing out for this company, go now and buy a holster from them. You’ll love it. And if you don’t, Brad will make it right. Bottom line, you’ll be a satisfied customer.